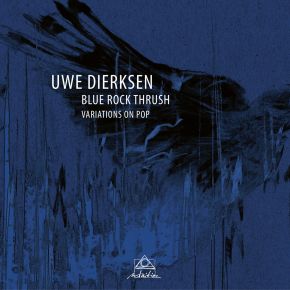 Pop? Rock? Jazz? Uwe Dierksen does not know this himself for certain. In addition, he does not want to know or perhaps even define this on principle. His new CD "Blue Rock Thrush" aims to draw the listener's attention less to any style and categorizations, but instead only refers to the blue rock thrush common in East Asia, whose English translation inspired him to give the CD this title.
In other words, a bird species. The song "Birdcrunch" also fits to that. The piece is based on a cassette tape, on which a cross section of birds in Thailand can be heard. Dierksen, trombonist in Ensemble Modern as well as the band Mavis and one of the most experienced interpreters of contemporary music in Germany is following the trail of ornithologists, Franciscan priests and composer Olivier Messiaen, who composed a piece for piano and small orchestra entitled "Oiseaux exotiques” (trans.: Exotic Birds) in 1956. Whoever assumes that this is perhaps a documentary about exotic bird songs is on the wrong track. Messiaen honored above all the musicality of the flying singers with his composition. It is a kind of musical transfer thinking, which Uwe Dierksen also likes to practice. Although the music apparently sounds like hard rock in his "Vogelkrise”, the idea is by no means exhausted with that. Quotes of the English composer Harrison Birtwistle can be heard in the middle of songs.
"Audio books without words: yes, that would perhaps fit best." Dierksen has often been asked to characterize his music, and his opposite has just as often reaped a friendly-helpless shrug. "I don’t want to be pigeonholed in any case," the 56-year-old Hanoverian said, who has extensive conceptual and practical experience with music of the 20th and 21st centuries both as an ensemble musician and as a soloist. As Dierksen knows, the reason is that pigeonholes restrict your way of looking at (listening to) things.