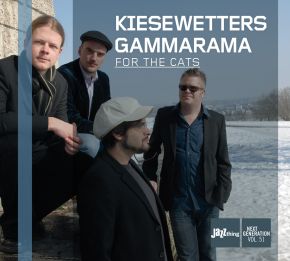 Jan Kiesewetter is a young man with ambitious goals, which he also achieves. The saxophonist is not only a gifted instrumentalist, but also a composer who is attracting attention. He had a stack of pieces that he composed and for which he was looking for a band that fit to them. He finally found the band members in 2011 and then immediately won the "Augsburg Art Promotion Prize" with them. The jury stated that he was awarded the prize because his band was distinguished by "a high degree of instrument mastery, musical presence, maturity and a commanding nature." The band name GammaRama has a hidden meaning: the music should penetrate everything in its path like gamma rays. However, the compositions are also penetrated by blues and jazz history, where Thelonious Monk repeatedly turns up, by multifaceted rhythms all the way to Cha Cha Cha, and by dreamy ballads to swinging uptempo numbers.
Jan Kiesewetter studied at Richard Strauss Conservatory and at HMT in Munich. He recently earned his Master's degree under Florian Trübsbach and is now a teacher too. Courses and workshops held by Michael Riessler, Joe Gallardo and Ingrid Jensen, among others, have left their traces, and the courses held by Gregor Hübner especially helped Kiesewetter in developing his own composition style. However – and this has advanced his work significantly – he also is involved in other fields from new music all the way to musicals in his concerts. A fortunate coincidence: mature, rich sound on an instrument and a gift for composition come together in one person.
The guitarist Bernd Huber is also involved in such wide-ranging projects. Although he graduated from the premier school of jazz guitar (under Peter O´Mara and Geoff Goodman, among others), he also studied classical guitar parallel (under Susanne Schoeppe). However, you can also frequently hear him as accompaniment for jazz singers or in bands that play  R&B, fado or free improvisations – a real jack-of-all-trades!
Uli Fiedler is almost the elder statesman of the band. Born in Augsburg and educated in Cologne, he already has numerous CD productions to his name, has accompanied the internationally known blues harpist Carlos del Junco on his tours and has played in theater and musicals. His solid framework is one of the reasons why the music on this recording grooves so well.
Another reason is the backdrop that the drummer provides. Tilman Herpichböhm is considered one of most talented German drummers. He studied in Nuremberg and has his basis in jazz, as do his co-musicians in GammaRama, but supplements his musical world with experience from the areas of theater, musicals and even free improvisation. He has already had his own bands.
In other words, there are also many chances to reap substantial enjoyment from young musicians, who studied and love jazz, in the 11th year of the series Jazz thing Next Generation. However, they do not simply want to preserve and cage it, but instead develop it further and put their personal stamp on it.