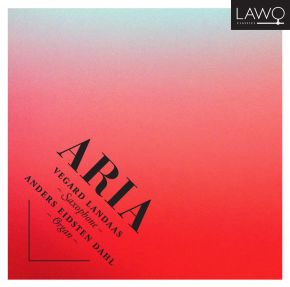 On their new record "Aria" Vegard Landaas and Anders Eidsten Dahl present some of the finest arias in music history, in an eclectic selection that ranges from Baroque composer Alessandro Marcello to contemporary, Norwegian composers.

An 'aria' is a solo song, usually with orchestra accompaniment. But the terms 'arie', 'aria', 'air' and 'arietta' can have another meaning as well. Throughout music history, composers have used them to signify instrumental music with beautiful, expressive melodies. Many of the pieces on this album were not written originally for saxophone and organ. Rather, they are special arrangements of these melodies, these 'arias'.

Edvard Grieg (composer)More information
Alessandro Marcello (composer)More information
Rolf Wallin (composer)More information
27-06-2014 SA-CD.net
"Everybody likes a good tune. Here is an ingenious programme of mostly little-known melodies, performed by a
soloist with accompanist. Unusually for "classical" music, the solo instrument is a saxophone and it is accompanied
by another wind instrument - the Main organ of Bragernes Church, in Drammen, south of Oslo.
Saxophonist Vergard Landaas was, in 2000, the first student of this specialisation to graduate from the Norwegian
Academy of Music. He now is one of the most prominent saxophonists in Europe. The classical repertoire for the
sax is fairly limited, and Landaas often has to use arrangements from music intended for other instruments, but he
encourages modern composers to write for him; an imposing list of whom appears in the booklet notes. His
accompanist, Anders Edsten Dahl, graduated from the Academy a year later than Landaas, and is much involved in
solo and concert organ music. Since 2001 he has been organist at the large Bragernes Church in Drammen, south
of Oslo, which is an important venue for regional festivals.
The collection of short pieces, several with heart breaking melodies, is esoteric, as is the list of composers:
David Bratlie (b.1972)
Edvard Grieg (1843-1907)
Erik Satie (1866 - 1925)
Geirr Tveitt (1908 - 1981)
Johan Halvorsen (1864 - 1935)
Eugène Bozza (1905 - 1991)
Rolf Wallin (b1957)
Ennio Morricone (b1928)
Oskar Lindberg (1887 - 1955)
Alessandro Marcello (1669 - 1747)
Helge Horum (b1936)
Some of the pieces are well-known (but not necessarily in their original formats); Grieg and Halvorsen provide two
sets of three pieces from their Norwegian folk music collections, while the poignant 'Gabriel's Oboe' theme from film
music by Erico Moriconi is played almost daily by one or more of the myriad classical music FM programmes around
the globe. Alessandro Marcello's Concerto in D minor for oboe, strings and continuo is well-known by Baroque
followers. It has splendid, memorable tunes in the outer movements, with a lovely languid Adagio between. Landaas
and Dahl play an arrangement based on JS Bach's somewhat ornamented arrangement for solo harpsichord and
this is highly successful.
The one piece originally written for saxophone and organ is by Oslo's Big Band leader, Helge Horum's "Sunset",
composed for the funeral of Horum's mother. A near-miss, as it were, is Rolf Rollin's 'Elegy for Trumpet and Organ',
a fine melody imbued with shifting harmonies suggested by Xenakis and Ligeti and a startling few seconds in the
middle when the organ lets loose with a sudden blast of anger, shaking a fist at the heavens. The composer gave
permission for the transcription.
Landaas has phenomenal technique in controlled breathing, required when the many pieces with long-breathed
cantabile lines are executed. He is able to vary his tone from bright and snappy in the Marcello fast movements (and
a Grieg march) to golden toned, sumptuously expressive; his instrument just sings. His artistry in presenting much
slow, emotional music without making listeners fall asleep makes a number of these circa 3 minute pieces sound
like little jewels. Dahl is a sympathetic accompanist, using appropriate registrations to match with the saxophone
tone in use, and ensuring that there are no signs of the towering Queen of Instruments covering his soloist. This is
fine chamber music-making, even if the chamber is a big church!
That last comment brings us to the recording, in stereo only. Usually with organs, it is important to capture the
mutual reactions of building tand organ, where a good multichannel recording is the best. For this aurally powermismatched
pair, however, a chamber set-up is required, with just enough of the ambience to let the tone,
particularly of the saxophone, to develop. The Lawo engineer seems to have set up for a near perfect balance, and
for once I didn't crave a multichannel track. There is a somewhat quirky design for the digipak format: the track list
appears diagonally in a tiny font on a rich green background. The sleeved booklet has an excellent guide, which
usefully guides you through the music.
This is an intriguing and highly enjoyable concatenation of short musical pieces with disparate origins . It shows how
versatile the sax can be, in hands as skilled as Landaar's. I strongly recommend it.
Copyright © 2014 John Miller and SA-CD.net"