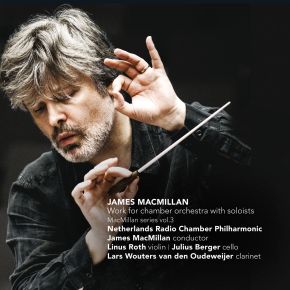 It is something of a cliché to observe that James MacMillan’s music reflects both his spiritual and his social engagement, and that very often these two aspects of his work come together and complement each other. Nevertheless, the music on this recording shows how such concerns genuinely do make themselves felt in the composer’s chamber and orchestral work. While Kiss on Wood has a specific spiritual dimension, the other three works all have links to MacMillan’s native Scotland, whether historical (as in ...as others see us...), geographical (as in From Ayrshire), or mining deep cultural layers in order to react to very contemporary concerns (as in Tuireadh).
The title of From Ayrshire, scored for violin and orchestra and written in 2005 for Nicola Benedetti, arose, says the composer, from their both having Ayrshire backgrounds. The first movement is certainly nostalgic. The second is altogether more earthbound, it is an explosion of energy, a bounding release from melancholy. Melancholy is the dominant emotion in Tuireadh (1991). The work (for clarinet and string orchestra) is an instrumental requiem for those who lost their lives in the Alpha Piper North Sea oil and gas rig disaster in 1988. The title of the work is the Gaelic word for “lament”, and the austere, folk-inflected quality of much of the writing suggestsprecisely a keening, a communal wailing for the departed. Kiss on wood for solo cello and strings is, as the composer said, a devotional work. ...as others see us..., scored for chamber orchestra, is a musical depiction of seven portraits in the National Portrait Gallery in London. They are all portraits of English people: Henry VIII, the poet John Wilmot (Earl of Rochester), John Churchill (Duke of Marlborough), Lord Byron, William Wordsworth, T.S. Eliot and the chemist Dorothy Hodgkin. Linking together these seven portraits of portraits, so to speak, is a Scottish dance tune, which is varied in each section in order to reflect the character of the person portrayed and the historical period.

why no audio clips?

James MacMillan (composer)More information
The Netherlands Radio Chamber Philharmonic (orchestra)More information
09-05-2015 Crescendo Magazine
""All six are full of rhythms and contrasts -of kinds of beautifully orchestrated medleys and one faith almost put together for a large Symphony Orchestra." "
04-05-2015 Limelight
"Editor's Choice
"MacMillan paints musical portraits from out of time and space. The now disbanded Netherlands Radio Chamber Philharmonic pounce upon the music with all the tenacity of an emsemble led by the composer - the colours and wit in the music sparkle."
Stars 4/5"

15-12-2014 Sinfini Music
"["].. A survey of the prolific Scottish composer's chamber music reveals many and exciting facets of a musician best known for his large-scale works.""
15-10-2014 International Record Review
"The orchestra plays with great precision and commitment and MacMillan is a fine enough conductor for us to be sure that these performances can be thought of as definitive. The recorded sound is rich and lifelike."
14-10-2014 The Observer
" "
01-10-2014 Luister
"The music of MacMillan surprises me everytime.

01-09-2014 BBC Music Magazine
"BBC Music Concerto Choice
It's hard to imagine any of these performances being bettered."

18-08-2014 Gramophone
"MacMillan at his most imaginative and inventive best exploring the limited resources of a chamber orchestra, these are compelling performances given particular impact under the composer’s taut direction.
The brief second movement is a dazzling exhibition of violinistic virtuosity in which Roth shows breathtaking brilliance.
"
14-08-2014 Northern Echo
"A must for devotees"
10-08-2014 Sunday Herald
"This is a strong programme, powerfully played with a manic drive to violinist Linus Roth's performance of the mad reel in From Ayrshire"
08-05-2014 Musicalifeiten
"With a few welcome CD premieres Challenge does an excellent job here. A lof of praise also for the precise, solid performances by soloists and orchestra."
BBC Music Magazine
""It's hard to imagine any of these performances being bettered.""