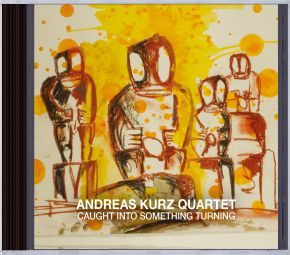 Caught Into Something Turning

Marty Cook, the great trombonist, didn't miss the opportunity to write the liner notes for Andreas Kurz's first CD under his own name. He comes to the conclusion that Andreas did "what great musicians have always done: he absorbed, transformed and expanded the wealth of traditions into something personal, something new." This is reflected not only in his sensitive but demanding playing on his instrument, but also in his compositions, as you can now hear. They are distinguished by the successful mirroring of human feelings in melodies, which are often very catchy but never banal. Instead, they are well thought-out with a refined structure and an almost philosophical depth. A type of narrative unfolds in the ballads, through which the complete band moves. However, the maturity of the former newcomer and shooting star of the Munich jazz scene cannot be overheard in the fast pieces either. Even complex rhythmic displacements or unusual metrics sound completely effortless. The three co-musicians of Andreas Kurz are also responsible for this. All four have known each other for years and have performed on stage innumerable times, which results in blind understanding. Not to be forgotten: each musician is a member of the elite in German jazz in his own right.
Andreas Kurz has been part of the "Double Moon Records Family" as bassist on several CDs for almost 10 years. He was already a musician in demand before that in southern Germany and played alongside of Jan Eschke, Bastian Jütte and Johannes Enders at that time. He has performed far beyond the borders of his native place over the past years and played alongside Benny Golson, Joe Locke and Vincent Herring as well as on the successful last album of Max Mutzke. In addition, he has won a number prizes, e.g., as bassist of the Tim Allhoff Trio. In other words, it's time for him to move up to the front row as leader and composer and present his own album.
Saxophonist Johannes Enders is almost the foster father of Andreas Kurz in music; Kurz was already at his concerts when he was 13. Enders is one of the most successful (e.g., Echo Jazz 2012, Best National Saxophonist) and well-known German musicians, who has also attracted international attention with his bands such as "Enders Room" (electric jazz Wolfgang Haffner, among others) and "Triotope" (with Billy Hart). The range of styles of this exceptional musician is also very well suited to the richly varied compositions on the recording.
Jan Eschke has been a fellow traveler of Andreas Kurz for more than 15 years. The two have played together in several bands since then. In addition, Eschke has played in "Enders Room" and alongside Charlie Antolini, among others, i.e., versatility is certainly one of his great strengths too. The virtuoso and sensitive pianist also has his own trio under the name of "Dreizack".
Bastian Jütte has also been honored with prizes (among others, Echo Jazz 2013, Best National Drummer). He is known for not continually shoving his way loudly to the foreground, but instead convinces thanks to his fine feeling for subtlety. The perfect drummer for this quartet and one of the best musicians in Germany.
Four of the best musicians in Germany, who have known each other for almost 20 years, united in a quartet in a class of its own!