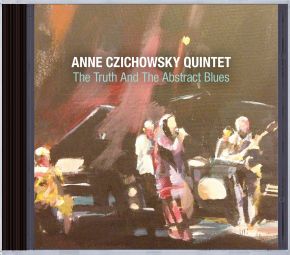 The Truth And The Abstract Blues

Jazz singing (and not only singing) has changed considerably over the past decades. This proves the ability of jazz to integrate new trends, styles and techniques and combine them into something new as only few other genres can. At times, the reference to the roots is also lost or even ignored. However, artists appear on the scene time and again, who do the one without leaving out the other. The Anne Czichowsky Quintet is one of the contemporary masters of this discipline in Germany (and beyond). It celebrates the relaxed but driving sound, which is so particular to swing jazz. But then it already switches to an uptempo bebop only to meet again in a ballad, which deeply moves the listener: with a radiating voice, but also at times with a guitar solo that could fit perfectly in a rock song. Anne Czichowsky composes lyrics for instrumental pieces and solos again and again, as she already did on her previous album (released by Neuklang), among others, "Idle Moments" (Duke Pearson) and "Blues and the Abstract Blues" (Oliver Nelson). She scat sings with her variable and very accurate voice, which you almost would want to call an "instrumental". A simply beautiful and entertaining CD has resulted, a joy for aficionados of acoustic, modern jazz.