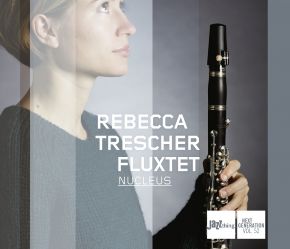 It starts softly, feeling its way with a few strange guitar sounds, which are then accompanied by deep sounds from the bass clarinet. Little by little, alto saxophone, bass and drums join in; the carousel called Fluxtet takes off. It moves through different levels, touches on swinging elegance as well as free-toned modern music. The focus is always a band sound that shines thanks to clever arrangements, but also due to intensive FX operation of the guitarist. The lines in the register of the similar wind instruments alto sax and clarinet are a trademark of Fluxtet, even if the bass clarinet provides a distinctive touch at times with a deeper tone. This young band distinguishes itself from others not just thanks to the rare combination of instruments (with clarinet and guitar, but without piano), but also thanks to its rhythmically and melodically thrilling compositions. In a search for stylish entertainment, you can find what you are looking for here far from customary clichés.  Peter Fulda makes this clear in his liner notes: "Rebecca Trescher's restraint is spectacular. In the music business of brief attention spans, she dares to do without brash 'convincing music' and trusts in the magnetic attraction of a good story, stable groundwork and a significant idea."
Rebecca Trescher was once a member of the Bundesjazzorchester (German Jazz Orchestra), as so many outstanding musicians of the next generation, and studied under Steffen Schorn, Klaus Graf and Hubert Winter at a music college. After she graduated in 2012, she continued her studies in composition under Prof. Steffen Schorn. She has already received several awards and won the next generation jazz contest 2013 in Leipzig, for example. Her devotion to music is also illustrated in her additional activity in various other bands. The fact that Rebecca Trescher plays the clarinet as main instrument, something rather rare in jazz, demonstrates that she cares little for trends, but instead seems to have already found her path at a young age.
Alto saxophonist Julian Bossert also studied at Nuremberg Music College and graduated in 2013. He also played in the Bundesjazzorchester at the same time as Rebecca Trescher. However, it was not just the concerts played together there that made him first choice at the founding of Fluxtet; both his lyrical tones and melodies as well as his surprisingly mature playing technique fit wonderfully to the music.
Phillip Staffa studied at Würzburg Music College and graduated with distinction in 2008. After taking numerous courses and workshops (among others, under Scott Fields, Frank Wingold, Bill Elgart and Peter O´Mara), he is now a teacher himself in Berlin. Another factor that distinguishes him: he composes successfully for films and television movies and consequently knows how you can tell stories with FX operation and guitar.
Friedrich Betz on bass also studied at Würzburg Music College. He then moved to the Mannheim Pop Academy in 2013, where he is developing his skills further in composition and producing. His rich experience in several jazz bands as well as pop bands makes him an ideal music partner in Fluxtet.
The shooting star Tilman Herpichböhm has become one of the drummers most in demand in the meantime. He graduated from Nuremberg Music College "summa cum laude" in 2012. He has played in several bands since then, not the least in Kiesewetter's GammaRama – Jazz thing Next Generation Act – in February 2014.