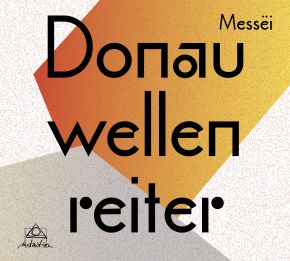 What the Donauwellenreiter serve up on their new, second album is simply incredible, incredible because there is no pigeonhole for these songs and any classification would have to fail. But also: simply incredibly beautiful. A theme, a melodic inspiration and an appropriate ambiance made real with that which the trio can provide in abundance anyway: the emotional, powerful voice of the singer Maria Craffonara, who also enthuses with flawless violin sounds when required; the virtuoso on the keys Thomas Castañeda, who often conceals his technical brilliance behind wondrous, touching melodies; and an accordionist Nikola Zarić, who creates sounds that you can hardly believe come from this instrument, all the way to the sound of a complete string ensemble.  One of the best drummers in Europe joined the band for this CD: Jörg Mikula. It could hardly be better, because the new compositions of the pianist Castañeda for Messëi are much groovier than the previous songs. In addition, because the delight in this new addition was so great, other gems were engaged for one piece or another: from the very young singer Magdalena Grabher to the bassist Raphael Preuschl and all the way to trumpet player Alexander Wladigeroff and trombonist Mario Vavti. Fantastic compositions, inspired musicians: if a gift producer then draws the threads together, the work is complete. Alexander Nefzger, who has worked with André Heller and Clara Luzia, has succeeded in giving the final polish. Music radiates now, which is unrivaled. And it is perhaps as it only could be created in Vienna, this multiethnic city, the bridge between Eastern and Western Europe and the living proof that cultural uniformity is a dead end and that variety can result in exhilarating moments in art. Messëi is a fine specimen of that and suitable for all friends of tango, singer-songwriters, jazz, folk, Balkan pop, Klezmer, Latin, minimal, etc.
Although the Donauwellenreiter first formed as a trio in 2010, they are already the shooting stars of the Austrian music scene. Their first CD already resulted in numerous shows in Austria and Europe as well as to prizes and distinctions. It is not surprising that a comprehensive tour through Germany, Austria and Italy has already been arranged for this second album. In addition, festival performances have already been booked in France, Israel, Slovenia, Portugal, Germany and other countries during the course of this year.
The composer and pianist of the trio Thomas Castañeda is Tyrolean but has Mexican roots, as his name betrays. As a young self-taught musician, he went to Vienna and played in various rock and pop bands. He has refined his playing over the years, and – above all – he discovered his talent for composing: the basis for the success of Donauwellenreiter.
Maria Craffonara from northern Italy is not only remarkable on instruments (she studied violin and piano) and with her voice (classic education at the Mozarteum in Salzburg), but also linguistically. She speaks Ladin, a language that is only spoken by few people in her native region, the Dolomite Mountains (and also in Friuli and the Swiss Grissons). The name of the CD also comes from Ladin: Messëi means "must". In addition to Maria's great musical variety, her linguistic variety helps set the tone of the music for the trio.
The accordionist Nikola Zarić born in Vienna as the son of Serbian parents was already filled with enthusiasm for the accordion as a small child and has played it since he was seven years old. He underwent academic training at Franz Schubert Conservatory in Vienna. He has attracted public attention thanks to numerous prizes won at international competition in Austria, Italy, Serbia, etc.
Jörg Mikula is perhaps the most versatile and busy drummer in Austria. He gets his inspiration not only from jazz and rock, but also from his studies of African and Arabic rhythms. He is not simply a metronome or groove machine, but instead steers with a lot of musicality and ambiance.
The Bulgarian Alexander Wladigeroff (trumpet, flugelhorn) – educated under Gerard Presencer in London, among others – lives in Vienna in the meantime and works at Burgtheater in addition to his own projects.
Trombonist Mario Vavti lives in Vienna and has performed in innumerable bands, from the Jazz Big Band Graz to Nenad Vasilic Balkan Band, as well as throughout all of Europe.
The Viennese bassist Raphael Preuschl is considered as a shooting star among young bassists and consequently is justifiably very busy. All the more beautiful that he could provide the deep sound basis at the right spots for this production.
Magdalena Grabher studied voice in Vienna. Once you listen to her voice full of sound and mellowness, you will remember her name. We'll certainly come across it again!

16-06-2014 Music Frames
"Music that after a few times listening gets more impressive and makes the longest river of Europe flow slow and fiercely."
19-05-2014 Rootstime.be
"The songs are short, so that the atmosphere is always changing, with alternating leading roles for accordion and piano, wonderful music. This is only their second CD, but keep an eye on them, these these musicians are capable of a lot!"