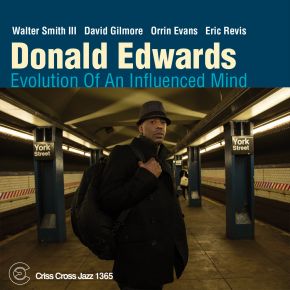 Evolution Of An Influenced Mind

After six prior engagements for Criss Cross as a sideman, drummer Donald Edwards' first leader offering for the label is a program of ten well-wrought originals that embrace the complex harmonies and rhythms of 21st century jazz while hewing to strong melodic values and abiding soulfulness.

26-04-2014 Jazzenzo
"After an hour of music, you may wonder why Edwards has not recorded an album as a leader earlier on. Perhaps his reputation as an all-rounder has something to do with it. But that term, will do him short. This album shows that he does indeed have its own identity.
"