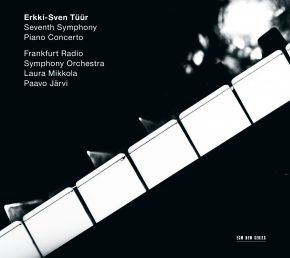 “For me, composing is like making the design of a building, a cathedral or a theatre. And then I create a drama inside the space, with different characters and many forces. A lot of different actions. It’s about creating a certain form of living energy.”
- Erkki-Sven Tüür

The sixth ECM New Series album by Estonian composer Erkki-Sven Tüür presents two major works, commissioned by the Hessische Rundfunk and given their premieres by the Frankfurt Radio Symphony orchestra. Both works are powered by what Tüür calls his “vectorial writing method”, a means of developing pieces from “a source code – a gene which, as it mutates and grows, connects the dots in the fabric of the whole composition.” The process, already reflected in works including “Oxymoron”, “Strata” and “Noesis”, has led to a body of work quite distinct from Tüür’s earlier, discursive ‘metalinguistic’ music in which diverse idioms – from serialism to minimalism – were contrasted, interwoven, reconciled. Tüür’s 21st century music foregoes “unnecessary eclecticism”, and manifests instead an organic coherence. These are pieces of determined, individual temperament. As Paul Griffiths observes in the liner notes, Erkki Sven Tüür’s 7th Symphony, written in 2009 and dedicated to the Dalai Lama “and his lifelong endeavours”, is a unique choral symphony, “a work where the orchestra has its own purposes, among which that of framing and supporting the voices is by no means paramount.” The texts that the NDR Choir sings include words of the Buddha from the Dhammapada as well as utterances of more contemporary visionaries and sages, from Gandhi to Mother Theresa. Once a text is used, says Tüür, if only minimally, “it starts to create meanings for an otherwise abstract musical material.” The physical power of the symphony then appears to be influenced and mediated by words addressing the power of compassion.

In the Piano Concerto, Finnish pianist Laura Mikkola gives an exceptional performance, responding to the surging waves of the orchestra and the inspired direction of Paavo Järvi. The concerto is a work of explosive energies, orchestra and piano moving on inter-related and intersecting planes, “continuous and continually in the process of meeting.”


CD booklet includes liner notes by Paul Griffiths, texts from the 7th Symphony, and photos from the recording

Paavo Järvi (conductor)More information
Frankfurt Radio Symphony Orchestra (orchestra)More information
27-05-2014 classicalmodernmusic.blogspot.nl
"The performances are weighty and dynamic, beautifully wrought. The sound is glorious."
01-04-2014 Opus Klassiek
"The recording has a transparent beauty and sonority which is essential to fully "understand" this music."