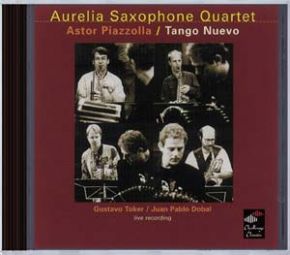 Astor Piazzolla was the leader of the "Tango Nuevo" (New Tango) movement. His father was Vicente Piazzolla and his mother was Asunta Manetti Piazzolla, both of wholly Italian descent. His daughter, Diana, gave Astor's parents the traditional Italian names for Grandpa and Grandma -- Nonino and Nonina.

One of Piazzolla's jobs was as music director to the dance team of Juan Carlos Copes and Maria Nieves, which included a trip to San Juan, Puerto Rico in October 1960, to appear in the Club Flamboyan. There, on the last night of the engagement, he received a telegram. Nonino had been injured in a fall from his bicycle and, due to complications, was in critical condition. When he called Argentina, his cousin informed him that Nonino had died just after noon that day. "It was the only time I ever saw cry," remembered Copes. Once home, Piazzolla asked to be left alone for a while. The emotions now caught up with him. His wife, Dedé, heard only sighs for a while. Then the sound of her husband playing a bright little tune he had written some time earlier, called Nonino. Then a pause, and then, amid continued sighs and the sound of crying came a new tune, a soul-haunting melody. It was the composer's way of saying farewell to his father -- Adios, Nonino. It became Piazzolla's most famous piece. "Perhaps I was surrounded by angels," he said 20 years later. "I was able to write the finest tune I have written. I don't know if I shall ever do better. I doubt it." He performed well over a thousand times, making 20 different arrangements of it.

His father's death impelled him to go back to Argentina to try his new tango there again with the lessons he had assimilated in America. Lacking the money for four fares for the family, he phoned his publisher in Paris, offering to renegotiate his contract for an advance, which he was granted. Gratefully, Piazzolla immediately sent the publisher Adios, Nonino, an act that benefited them both as it became what Piazzolla's biographers Maria Susana Azzi and Simon Collier called "the jewel in the crown of the Piazzolla list at Éditions Universelles."

For years, Piazzolla refused any efforts to set words to Adios, Nonino, but in the 1980s that talented singer Eladia Blásquez played him a tape in which she had sung lyrics she wrote for it: "Adiós Nonino...qué largo sin vos será el camino..." it began, "Farewell, Nonino...how long the road will be without you...." His eyes slightly misty, he nodded his assent.