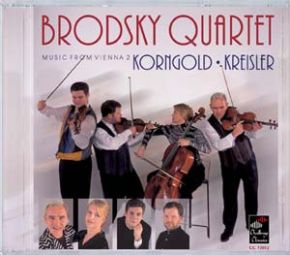 A blend of youth and experience, coupled with a unique versatility has assured the Brodsky Quartet a place at the very forefront of the international chamber-music scene. Formed in 1972 and named after Adolf Brodsky, the Russian violinist and pioneering pedagogue of Manchester, where the quartet studied, they were subsequently invited to become the first ever quartet in residence at Cambridge University, a post they held for four years.They have since held visiting fellowships at several other important establishments, most recently at Trinity College in London.

Their busy international schedule must be one of the most diverse, with a comprehensive repertoire and unique ‘standing’ performance style, a penchant for new commissions and bold collaborations, and a highly acclaimed extensive discography.They have worked with many of the world’s leading musicians including Maria João Pires, Barry Douglas,Anne Sofie von Otter, Gidon Kremer, Elvis Costello, Paul McCartney and Björk. Over the years the quartet has also worked closely with various composers such as Lutoslawski, Sculthorpe and most recently on a new work written for them by Dave Brubeck.

The Quartet have recently signed with Challenge Classics to record an exciting and varied repertoire ranging from Haydn to present day, with some innovative ideas including a major international project for the year 2000 involving six new commissions coupled with the Opus 18 quartets of Beethoven.These projects will form a large part of the quartet’s activities for the millennium, touring throughout the UK and Europe. In May 1998 the Brodsky Quartet were presented with a Royal Philharmonic Society Award for their outstanding contribution to the world of music.