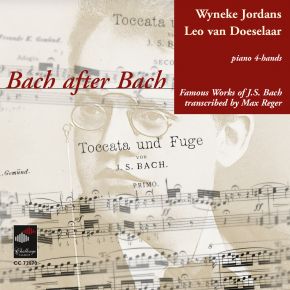 Piano duet arrangements have a history of more than two centuries. From Beethoven, Schubert, Mendelssohn and Brahms to Milhaud, Ravel and Stravinsky piano duet reductions of scores were not only legitimate, but also, without the ubiquitous stereo, a harsh necessity. Only in this way could one become really familiar with many masterworks and play them more than once. Unfortunately in the last few decades this expedient of reducing the symphony orchestra to the confines of the living room has been viewed with some conde- scension, even though almost all the great composers of the last century and the first half of this century were occupied with making arrangements of this kind. If you examine their solution more closely, you immediately realise with what imagination, craftsmanship and knowledge of the instrument they went about their task. Not only did they unveil the original scores’ secrets, they also enri- ched the already considerable repertoire with many masterworks. Max Reger considered it a great honour to be able to transcribe the Brandenburg concertos and orchestral suites. The Brandenburg concertos appeared in the Peters edition in two volumes in 1905 and 1906. Reger wrote to Peters: “Performance markings, which are missing entirely from the score, will be supplied by me, to bring the arrangements closer to our ‘modern,’ dynamic sensibility”. The transcriptions of the suites and Brandenburg concertos are carried out with obvious reverence. Of course there are octave doublings in the bass and occasional thickening of chords, but at the same time strikingly few additions of romantic, melodic slurs.

The works on this CD can be divided into two categories: of the first kind are the Brandenburg concertos and the orchestral suites, which, in being transferred to the piano duet medium were respectfully adapted according to the original score. Reger’s proposals for the use of dynamics in this music may be called demure compared to the arrangements of the second kind! Reger uses all Bach’s original slurring marks, but at the beginnings of movements he nearly always writes ‘ben legato’ or ‘non legato’. Oddly enough he writes the word ‘legato’ in the Overture of the Suite, but the other movements he prefers to be played ‘non legato’.

The second kind are free arrangements made in Reger’s own idiom. Just as Busoni arranged many organ works for piano in this way, Reger rewrote many harpsichord compositions for the large romantic organs of his time. Slurring and dynamics were made to accord with the instrument and current musical taste. Under the influence of the important music theorist Hugo Riemann Reger adapted the short-breathed early music to the prevailing preference for long melodic lines. The piano-duet transcription of the Organ Toccata follows the same procedure. The slurs all straddle the barlines, whispering ‘pianissimi’ alternate with thundering ‘fortissimi’ and the tempo quickens and slows accor- ding to the composer’s whim. Leopold Stokowski’s orchestration, made so famous through its later use in Disney’s film Fantasia, did not just come from thin air.

Naturally, the starting-point for our interpretation has always been the slurring, phrasing marks and dynamics used by Reger. It is a strange experience once again to feel no shame in making an oldfashioned trrrrill, beginning with the main note and then only in those places where the explicit marking tr can be found. Dotted notes, above all in the French Overture, were not to be played as double-dotted - at least not any more, as is made clear in the arrangements of Mahler and Reger and the recordings of Mengelberg. Here too we grew accustomed to ignoring Baroque performance practice! In a letter dated 1910 Reger asked the pianist Philipp Wolfrum to make corrections in Hans von Bülow’s edition of Bach’s Suite No. 2: the double-dottings introduced by Bülow were to be taken out (sic!).
Interpreting these transcriptions, one feels like actors in Shakespeare’s Romeo and Juliet, but reciting the same text in a completely different time and context. This strange time travel played a role especially when we were embarking on our study, until gradually we came to feel we were just pianists again, but born at a different time!