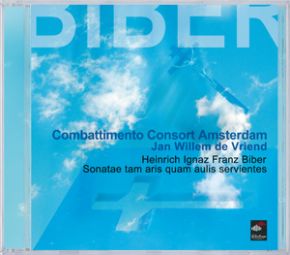 Founded in 1982 by violinist Jan Willem de Vriend, the Combattimento Consort Amsterdam has developed into a close-knit ensemble specialising in music from 1600- 1800.The musicians' wish not to focus solely on the standard repertoire has resulted in many interesting programmes featuring remarkable and little-known works, some of which are only available in manuscript. The performance of these compositions in conjunction with more familiar works has proved to be refreshing and inspiring to listeners and performers alike. Heinrich Ignaz von Biber by-passed the ban on profane chamber music with his collection of twelve sonatas, Sonatae tam aris quam aulis servientes (1676), which means at the altar as well as at court the collection with such a title, the sonatas became more interesting from a commercial point of view.After all, the sonatas were serviceable for both secular and spiritual occasions, during Mass, but also as table music during dinners at the palace. Apart from being an outstanding violinist, Biber was also a great composer and a remarkable man. He instructed musicians to play with the back of their bow, composed atonal and minimal music, allowed players to change the tuning of the strings (scordatura) or stuffed paper in between them. Also, we owe the Bartzicato to Biber rather than Bart His Sonatae tam aris quam aulis servientes seem to bridge folk music and concert music, between French and Italian bowing techniques, between secular and spiritual music. As if two different worlds shake each other original music. It is therefore not surprising that Wolfgang Amadeus Mozart made his son study the works of Biber. In this context perhaps the words of Paul Hindemith are most striking. He spoke of Biber characterising him as cable composer before Bach.