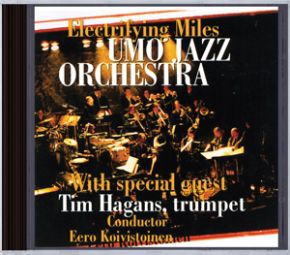 Miles Davis (1926-1991) hardly needs any introduction. There is no denying it: he was a genius. His importance to and influence on jazz and even beyond was incontestable. He was the fore-runner of countless jazz musicians, both personally and through others. The artists on this record included. The music recorded by his small ensembles is still being played everywhere, yet his long and fruitful partnership with arranger Gil Evans produced ample proof that he was just as much at home with a big band. This record therefore sets out to demonstrate how the UMO Jazz Orchestra, its soloists and arrangers feel music by Miles and others associated with him might sound when performed by a big orchestra in a modern context. It is in fact a journey into new territory and an ambitious attempt to bring the big band idiom in line with the demands of contemporary music.

Finland’s UMO Jazz Orchestra is regarded as one of the leading big bands in Europe, and it has for the past 23 years been playing a major role in promoting Finnish music both at home and abroad. Founded by a group of Jazz musicians in Helsinki, it began life as a part-time big band but became a full-time professional orchestra in 1984 with support from the City of Helsinki, the Finnish Broadcasting Company and the Ministry of Education. Its members are among the finest Finnish artists and at home in Finland the UMO is a top training ground for jazz musicians. Over the years the UMO Jazz Orchestra has welcomed such front-line jazz artists as Maria Schneider, Thad Jones, McCoy Tyner, Michael Brecker, Gil Evans, Bill Holman, Carla Bley, John Scofield, and Joe Henderson.

Tim Hagans has wide experience both of big orchestras and of smaller bands. Born in 1954, he first took trumpet lessons with Kermit Simmons in his native Dayton, Ohio and in 1973, having attended Stan Kenton’s clinic, he made a great impression on the band leader, who one year later hired him for his trumpet section. After spending three years with the Kenton orchestra, Hagans went on to the Woody Herman big band. In 1977, he settled in Sweden, making frequent appearances in the Stockholm and Copenhagen areas along with Shahib Shihab on sax, Ed Thigpen on drums and Horace Parlan on Piano. He was also to be heard as a member and soloist of Ernie Wilkins’ Almost Big Band and the Danish Radio Orchestra conducted by Thad Jones. Although he returned to the States in 1982, he still makes regular visits to Scandinavia and has a formidable number of records to his name.