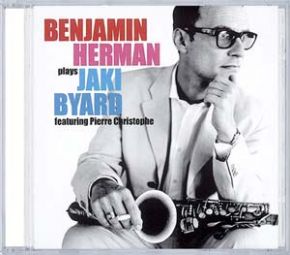 Benjamin Herman: saxophone | Pierre Christophe: piano |Jos Machtel: double bass | Joost van Schaik: drumsBenjamin Herman and the French pianist Pierre Christophe met way back in 1993 in New York when Herman studied there at the conservatory. Many years later, following the album release of Benjamin Herman Trio Plays Misha Mengelberg (AL 73203) in 2000, Herman invited Christophe to join his trio on tour. The idea was to present the music of Misha Mengelberg and Jaki Byard, two brilliant and original jazz pianists and composers. Christophe even studied with Byard for four years in New York.
The Benjamin Herman Trio and Christophe has a succesfull tour in The Netherlands (a.o. in the famous Concertgebouw Amsterdam) and Belgium. After that, they went their separate ways. But the music kept haunting Herman and in December 2001 he invited Christophe to record this album.
Like Mengelberg’s repertoire, the Byard material was challenging, powerful and above all, fun to play. The mission of the project was to introduce this great music to a larger audience, for so few people have ever heard it. Since Christophe was in close contact with Jaki Byard, the musicians decided to share some interesting inside details about the tunes. These are revealed in the booklet.