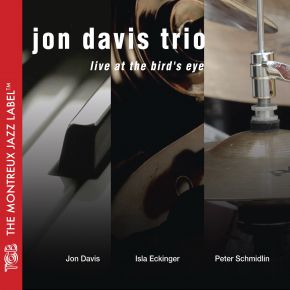 Pianist, composer, Jon Davis from New York has been performing and touring with many of the finest jazz musicians around world for more than 25 years. He has appeared on over 50 recordings. Jon Davis met with Swiss musicians Isla Eckinger and Peter Schmidlin some 15 years ago.
He appeared already on TCB 22142 ‘George Robert-Bobby Shew Quintet’, released in 2002. In 2013 he played a few concerts in December 2013 in Switzerland with this trio where the evening at the Bird’s Eye Jazz Club in Basel was recorded live.
Jaco Pastorius, longtime friend of Jon, said: ”Jon is my third favorite pianist…after Joe (Zawinul) and Herbie (Hancock)” and Jazz Japan mentioned that: “Jon Davis is the ultimate story teller.”
A relaxed, swinging Session in probably the best Jazz club in Switzerland with a very nice selection of great tunes from the American songbook plus a composition written by Jon Davis. Fans of the piano/bass/drums format will love this CD.