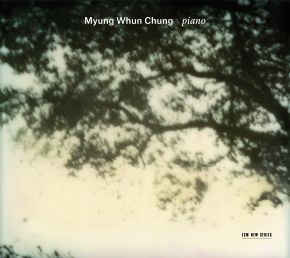 The ECM New Series debut of Myung Whun Chung features the widely celebrated conductor as pianist. Recorded at Venice’s Teatro La Fenice, in July 2013, the album marks the first occasion that Chung has recorded solo. In a performer’s note, he describes the album as a gift for younger listeners, as well as a personal thanks to those who share his love of this music.

Chung’s touch and sensitivity for dynamics cast a new light on familiar pieces – by Debussy, Chopin, Beethoven, Tchaikovsky, Schubert, Schumann and Mozart – as they are experienced in a gently flowing sequence which also serves to highlight affinities between the compositions.

Myung Whun Chung (born 1953 in Seoul) made his debut as pianist with the Seoul Philharmonic at the age of seven. He studied conducting in New York, at Mannes College and the Juilliard School, and studied the piano with Maria Curcio, the last and favourite pupil of Artur Schnabel. In 1974 he was joint second-prize winner in the Tchaikovsky Competition (where he performed Tschaikovsky’s “Autumn Song”, revisited on the present recording from La Fenice).

Chung then began his career playing piano trios with his sisters, Kyung Wha Chung and Myung Wha Chung, and serving as assistant conductor at the Los Angeles Philharmonic during Carlo Maria Giulini’s tenure.

Appointments followed as chief conductor of the Deutsche Radio Philharmonie Saarbrücken (1984-90) and principal guest conductor at the Teatro Comunale in Florence (1987-92) before he took his place at the forefront as music director of the Paris Opéra (1989-94). He opened the inaugural season at the Opéra Bastille with a much praised interpretation of Berlioz’ Les Troyens; he also became Olivier Messiaen’s conductor of choice, and the dedicatee, with his orchestra, of Messiaen’s Concert à quatre. Among many international prizes and awards, he was admitted to the Légion d’honneur in 1992.

Many of his recordings (for Deutsche Grammophon) have won prizes, amongst them his accounts of Olivier Messiaen's Turangalîla Symphony and Eclairs sur l’Au-Delà, Verdi's Otello, Berlioz's Symphonie Fantastique, Dmitri Shostakovich's Lady Macbeth with the Orchestre de l'Opéra Bastille; a series of Dvorák's symphonies and serenades with the Wiener Philharmoniker, a series dedicated to sacred music with the Orchestra dell'Accademia Nazionale di Santa Cecilia, including the award-winning recording of Maurice Duruflé’s and Fauré’s Requiems with Cecilia Bartoli and Bryn Terfel.