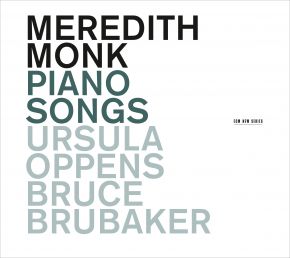 Celebrating Meredith Monk as composer, this album of Piano Songs presents a sonic world at once playful and earnest, familiar to those who know the one-of-a-kind universe created in her groundbreaking works for voice. Drawn from music composed between 1971 and 2006, these pieces for piano duet and piano solo are performed by two of today’s most distinguished interpreters of new music: Ursula Oppens and Bruce Brubaker. These works are “songs” because they have roots in Monk’s pieces for voice and because they are direct, specific and imagistic. The composer on writing for two pianos: “I delved into different relationships and the possibilities between them; material passed back and forth, dialogues, interlocking phrases, shifts of figure and ground. In some pieces, I emphasized the individuality of each piano, writing for one player as the ‘singer,’ the other as the ‘accompaniment’; in other pieces, I wanted the two pianos to make one large sound.”

As a creator of new opera and music theater pieces, Monk has been hailed for her pioneering work with extended vocal technique and interdisciplinary performance; over a career of nearly 50 years, she has explored the voice as an instrument unto itself. Yet long before she began composing music for the voice, Monk wrote short piano studies as a music student inspired by the examples of Mompou, Satie and Bartók. She returned to composing for piano in the early ’70s, producing pieces that had their “own topography, texture and mood,” as she writes in the liner notes to Piano Songs. In her piano music, “directness, purity, asymmetry and, above all, transparency have always been important to me. The surface of the music is seemingly simple but the intricacy of detail and the combination of restraint and expressivity challenge the performer. Every gesture is exposed and clear.”

Ursula Oppens and Bruce Brubaker are ideal interpreters of Monk’s keyboard aesthetic. Oppens is an acclaimed performer of contemporary music, having recorded the complete piano works of Elliott Carter as well as music by Frederic Rzewski, Charles Wuorinen, Tobias Picker and many other living American composers. Brubaker – chair of the piano department at New England Conservatory (where the album was recorded) – has long been a key exponent of American minimalism and post-minimalism, having recorded works by John Cage, Philip Glass, John Adams, Alvin Curran and William Duckworth. The two pianists had known each other for decades but had never performed in tandem until Monk’s music brought them together. Oppens and Brubaker played in a 40th anniversary celebration of the composer’s career at Carnegie Hall in 2005, an event that prefigured Piano Songs.
Reflecting Piano Songs, Brubaker says: “There’s an intriguing balance in Meredith’s piano music between simplicity and a kind of music you’ve never really heard before. It feels familiar and strange at the same time. Some elements can sound almost like folk music, but they can be challenging in the way they fit together. Meredith’s music has a wonderful inevitability to it, as if she discovered it as much as composed it.”

The making of Piano Songs was a collaborative undertaking, with the composer in the studio alongside Oppens and Brubaker. “Meredith was sometimes very detailed in what she wanted, yet her advice could also be open-ended,” Brubaker recalls. “It was a blend of careful preparation and spontaneous performance, the best sort of session.” Solo, Oppens performs “St. Petersburg” and “Paris”, the piece that was Monk’s return to composing for the instrument, in 1972. Brubaker takes “Windows in 7’s” and “Railroad (Travel Song)” on his own. Among the works for two pianos, Brubaker arranged “urban march (shadow)”, ”Tower”, “Parlor Games” and “totentanz” (with the latter from impermanence, the major work for voices and ensemble that was recorded for an acclaimed 2008 ECM album). Brubaker says: “Some of these pieces started out as scores for voices or for voices and other instruments, and transporting these into another world gives us all the wonderful opportunity of hearing the music afresh.”

“I work in between the cracks, where the voice starts dancing, where the body starts singing, where the theater becomes cinema,” Meredith Monk once said. “I try to never forget that I enjoy the privilege of engaging in an activity that affirms the spirit of inquiry and allows me to make an offering of what I have found. I am grateful for being part of music, for the magic of music permeating my life."

Meredith Monk invented something new with her vocal innovations, and her fusion of sound and movement is as daring now as it was when she made her professional debut in 1964. Performers of her compositions include not only her own longstanding Vocal Ensemble but the San Francisco Symphony & Chorus, the Kronos Quartet and Bang On A Can All-Stars, among others. Her reach also extends beyond the classical world, influencing such musicians as Björk, John Zorn and DJ Spooky.

Monk holds Carnegie Hall’s 2014–2015 Richard and Barbara Debs Composer’s Chair. During her residency, there will be performances of her piano, chamber, orchestral and vocal works, including concerts featuring her at the head of her Vocal Ensemble. The residency extends beyond Carnegie Hall to the Greenwich Village club Le Poisson Rouge on Nov. 20, 2014, when Ursula Oppens and Bruce Brubaker will perform a program drawn from Piano Songs.

Monk’s music has been heard in many high-profile films, including Nouvelle Vague and Histoire(s) du Cinéma by Jean-Luc Godard (with soundtracks to both released on ECM New Series), The Big Lebowski by the Coen Bros. and her own Book of Days. She has been recording for ECM since 1981. Her ECM debut, Dolmen Music, won a Preis der deutschen Schallplattenkritik. Monk’s subsequent ECM discography includes Turtle Dreams (1983), Do You Be (1987), Book of Days (1990), Facing North (1992), Atlas: An Opera in Three Parts (1993), Volcano Songs (1997), mercy (2002), impermanence (2008) and Songs of Ascension (2011).

Previous to Piano Songs, ECM released Monk’s Songs of Ascension, for voices and strings. The Los Angeles Times praised the work at length, with critic Mark Swed writing: “The music is glorious. Monk’s most significant growth over the past decade or two has been as a composer. She is a great master of utterance… A listener feels somehow in communication with another, perhaps wiser, species.”

Meredith Monk (composer)More information
01-10-2014 hvt
""The record? ECM-quality!" "
27-05-2014 classicalmodernmusic.blogspot.nl
"Oppens and Brubaker take to this music readily and sound just right. It is music that brings me great pleasure. And perfect for the budding memories of past and future. Excellent!"
13-05-2014 Wondering Sounds
" They do such a tremendous job, however, it’s tough to imagine that any newcomers to the Meredith Monk discography would stop here."