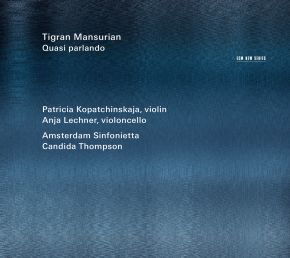 “Quasi Parlando” is an important addition to ECM’s documentation of the work of Tigran Mansurian, an often breathtaking account of highly original contemporary chamber orchestra music. Issued in the wake of his 75th birthday, the album opens with the Armenian composer’s fiercely-concentrated Double Concerto, and proceeds to new music performed by its dedicatees: the lyrical Romance, dedicated to Moldavian violinist Patricia Kopatchinskaja, and the intensely expressive Quasi Parlando, dedicated to German cellist Anja Lechner. Both are world premiere recordings, as is the Concerto No 2, subtitled Four Serious Songs, which concludes the programme. Throughout, the soloists deliver committed performances, as does the Amsterdam Sinfonietta under the direction of Candida Thompson.

In the liner notes, Wolfgang Sandner describes title piece Quasi Parlando, composed in 2012, as one of the works which best exemplify Mansurian’s aesthetics of reduction: “Every note is exactly where it belongs. Compositional feeling seems at one with the innate potential of the sounds. Yet we are amazed to hear how the cello’s rhetorical figures congeal into an effective and expressive art that transcends the conceptualisations of speech.” The Romance, composed a year earlier, initially retains the four-bar periods of a simple but moving folk song until the strings enter a dialogue with the solo violin, whereupon a transformation takes place...

In terms of textural density, Mansurian’s music has seen some changes in the thirty years that separate the composing of the Double Concerto and the Four Serious Songs, but his aesthetic stance has been consistent, both works sharing an immediacy of expression and rigorous creative will. At the same time, the composer encourages a degree of creative freedom from his music’s interpreters: “What is important is what the music needs, not what I need”, he said in a talk given at the Muziekgebouw Amsterdam, immediately before the recording of these pieces in October 2012.

Patricia Kopatchinskaja has described the violin part of Four Serious Songs as “pure spirit and magic.... Tigran’s music is some of the strongest of our time.”

Born in Beirut in 1939, Tigran Mansurian moved with his family back to their ancestral Armenia in 1947, and studied at the Yerevan Conservatory of which he would eventually become the director. In the 1960s he was attracted by the ideas of the Western new music avant-garde but became increasingly convinced of the importance of the spirit of place and of composing in an authentically Armenian voice. “Our position on the map of music and culture,” he has written, “is exactly on the spot where East and West meet.” It is this special vantage point that fires his creative imagination.
His music was first heard on ECM with the recording Hayren (2000), where his pieces were brought together with music of his great formative influence, the ethnologist, composer and priest, Komitas. Subsequent Mansurian recordings include Monodia, the String Quartets, and the choral album Ars Poetica.

Violinist Patricia Kopatchinskaja was born in Chisinau, Moldova, and  studied violin and composition in Vienna and Berne. Her repertoire includes not only the classical and romantic literature but modern works by Bartók, Ligeti and Kurtág, Galina Ustvolskaya, the Second Viennese School, and many compositions written for, dedicated to and premièred by her. In 2000 she won the International Henryk Szeryng Competition in Mexico. She has also received awards for her complete recording of Beethoven's works for violin and orchestra, and the concertos of Bartók, Eötvös and Ligeti. The present disc is her first with ECM. Kopatchinskaja is emphasizing music of Mansurian in her 2014 touring schedule, which includes dates with the Britten Sinfonia playing the Four Serious Songs, and with Camerata Bern, playing the Romance. For concert details see www.ecmrecords.com. In autumn 2014, she will also be playing Mansurian’s music with the St. Paul Chamber Orchestra.

Cellist Anja Lechner was born in Kassel and grew up in Neubeuern am Inn. She was a pupil of Heinrich Schiff and János Starker. A co-founder of the Rosamunde Quartet, whose repertoire embraced both contemporary and classical music, she played with this formation from 1991 until its disbanding in 2009. Active both as chamber musician and solo recitalist she performs at many international music festivals. Contemporary composers including Valentin Silvestrov, Tigran Mansurian, Günter Bialas, Tõnu Kõrvits und Zad Moultaka have entrusted her with premières of their works. Lechner’s recordings with the quartet and other musical formats have won many awards. In addition to string quartets by Haydn and Shostakovich they include works by Gurdjieff (Chants, Hymns and Dances with Vassilis Tsabropoulos), a recording of Valentin Silvestrov's leggiero, pesante, as well as tango-aligned recordings with Dino Saluzzi (Ojos Negros, Navidad de los Andes, Kultrum), and collaborations with François Couturier in the Tarkovsky Quartet, with improvisations and compositions referencing the Russian filmmaker. Her previous recordings of Tigran Mansurian for ECM include the String Quartets, with the Rosamunde Quartet.

CD booklet includes liner notes by Wolfgang Sandner in German and English, artist biographies, and photographs from the recording.

Anja Lechner (artist)More information
Tigran Mansurian (composer)More information
Candida Thompson (conductor)More information
19-11-2014 WebsiteAVROTROS - Radio 4
"WIN CD - Radio 4 (AVROTROS)"
01-10-2014 hvt
""Music that requires you to sit down""
10-06-2014 Opus Klassiek
"Such a beautiful stringsound is rare, while the balance between soloists and ensemble optimally realized."
02-06-2014 classicalmodernmusic.blogspot.nl
" Strongly recommended."
01-06-2014 Luister
"It is hard to imagine that there are executions which sound better and show more spirit"
10-05-2014 Pizzicato
""Tigran Mansurian’s intense music could hardly be better served then by the performers of this outstanding, profoundly moving ECM production. Especially Kopatchinskaja is entirely immersed in the music and she has strong support from the flawless Amsterdam Sinfonietta.""
01-05-2014 Plato Mania
"Everything is said with spirit, magic and pure music."
24-04-2014 Musicalifeiten
"The great thing about this works is that they immediately capture you, appeal and when repeatedly listened to they open new perspectives each time."
Crescendo
"Crescendo Joker!
"At once intense and austere, Quasi parlando lasts only eight minutes - eight minutes that the young German cellist Anja Lechner manages to make poignant, almost heartbreaking. In the parts that she plays, Moldavian violinist Patricia Kopatchinskaia play just as subtle, just as it was in 2009 in the beautiful integral recording of  of works for violin and orchestra of Beethoven with the Orchestre des Champs-Élysées conducted by Philippe Herreweghe (Naïve). A superb album.""