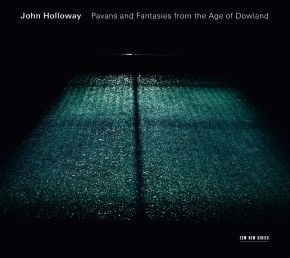 Pavans and Fantasies from the Age of Dowland

The composition of Lachrimae Pavans, one of the great works in the canon of English chamber music, was begun in Denmark at the end of the 16th century, while John Dowland was working as a lutenist at the court of King Christian IV. A unique seven-part work developing a theme from Dowland’s famous song “Flow my teares” and exploring all its contrapuntal and harmonic possibilities, it is also music of persuasive emotional power. “How well he seems to have understood the power of music to move us,” writes John Holloway in the liner notes, and “to express otherwise inexpressible emotions. He called them ‘passionate pavans’, and within the stately constrained movements of the slow dance, passions are indeed to be found.”

The music, according to the title page of the folio volume, is “set forth for the lute, viols or violons”. Choosing to emphasize “violons” Holloway and company play the Dowland Pavans on four violas and bass violin; “As has been said of Dowland, his greatest works are inspired by a deeply felt tragic concept of life and a preoccupation with tears, sin, darkness and death. With that in mind, the choice of instruments made itself.”

In this recording, produced by Manfred Eicher at Zürich’s Radio Studio, John Holloway and his ensemble juxtaposed the Pavans with other pieces by Dowland’s contemporaries, in a programme with strong contrasts of character and sound colour – from Purcell’s extraordinary “Fantasy upon one note” to Thomas Morley’s haunting “Lament” – evoking the great flowering of English instrumental consort music of the late 16th and early 17th centuries.

CD booklet includes liner notes by John Holloway and photographs from the recording.