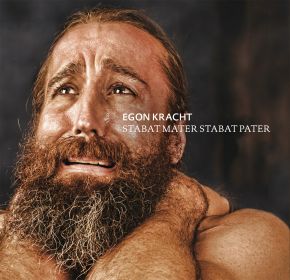 "Stabat Mater Stabat Pater is the third passion work I’ve written over a ten year period. It completes a triptych of modern religious pieces in which suffering is central. In contrast to other passion works this theme doesn’t necessarily revolve around Jesus’ death on the cross. As a non-believer I prefer to stress the human aspect in ancient religious writings. Friendship, love of one’s neighbour and treason remain the major topics, but their perception is taken out of religious context.

For the St. Matthew’s Passion, my instrumental reworking of Bach’s masterpiece from 2002 my starting point as a composer was: What will remain of the spiritual content if you leave out the lyrics? ‘Thank god’ the attempt was successful; bare to the bone Bach’s music still manages to touch the listener’s soul directly. In his libretto for my Judas Passion Jeroen van Merwijk drew upon the Gospel of Judas Iscariot, rediscovered in 2005. In this Judas doesn’t appear as the bad guy, but as Jesus’ best friend. Jesus asks Judas to betray him as the ultimate act of friendship. It puts Judas in a mental torture, making it Judas’ passion. The staged version of the Judas Passion premiered in 2010.

In the beginning Stabat Mater Stabat Pater was simply a musical setting of the famous 13th century poem Stabat Mater Dolorosa. This was written by an anonymous monk, and in the history of music many composers have set it to music. Gradually I felt the need to give the father a role in the story: A man who is joining his wife in mourning their child’s death. It’s a situation which can often tear a family apart, for quite often the parents can’t share their grief. This is the subject matter that lies at the heart of Stabat Mater Stabat Pater.
I adapted the original poem in places and gave the father a voice. I also wanted to use text material of a secular nature. Upon my request Jaap Toorenaar made a ‘male’ adaptation of the Stabat Mater Dolorosa (‘Stabat Pater Dolorosus’). I asked my wife, Noortje Braat, to write some contemplative lyrics in Dutch and I took some lines from novels by the Dutch authors A.F.Th. van der Heijden and P.F. Thomése. This all resulted in a libretto in which Latin and Dutch texts stand side by side. Thus both the mother and the father are given a voice, and the parents’ grief over the loss of a child is put into a secular context. In addition to the father and the mother a third voice is introduced: the ‘good friend of the family’, who stands by the parents in a period of mourning.

Stabat Mater Stabat Pater is performed by The Troupe, my own ensemble, which has helped me perform many musical and theatrical projects. For every new composition The Troupe’s line-up is different. I will pick the musicians who will best suit the particular overall sound I have in mind. At the same time I will write for the individual performer what best suits him or her, making use of their musical strengths. This particular incarnation of The Troupe is of a wondrous beauty, making for a splendid performance of the composition. Right on the nose, with an intensity that befits the work. One Dutch newspaper, in a review of the 2011 premiere, called Stabat Mater Stabat Pater a ‘modern classic’. The whole Troupe should take that compliment as it was intended."

Egon Kracht (artist)More information
The Troupe (artist)More information
Egon Kracht (composer)More information
Noortje Braat (composer)More information
01-06-2014 Opusklassiek.nl
"Everything falls into place. The singers sing pure and the organ places himself almost secretly in the music. The key is that the composer Egon Force has understood what it is about."
30-05-2014 Rootstime
"Combining classical singing with a jazz instrumentation seems bold, as is the use of the Dutch language, but it works wonderfully well."
Jazzenzo
"Stabat mater Stabat Pater is a modern classical work, but it is also  contemporary composed.
And that alone is an achievement in itself"