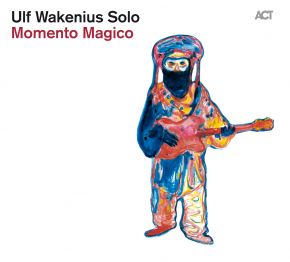 Jazz musicians could add ‘travellers’ to their job description - since being on tour is an indispensable part of a successful career, in a sense jazz musicians are descendents of vagabonds and wandering people.

These thoughts also crossed Ulf Wakenius‘ mind when he named his new album Vagabond. After all, he has travelled around the globe several times; in the early ‘80s he toured all over the world with Guitars Unlimited, a guitar duo with Peter Almqvist. In between he stayed in Brazil and played with some of the country’s most prominent local musicians. After that he continued performing in concert halls and jazz clubs around the world – for years Wakenius worked together with Ray Brown and the bassist Niels-Henning Ørsted-Pedersen, with whom he even played for the former US president Bill Clinton. He has performed in concert with stars like Herbie Hancock, Toots Thielemans, Hank Jones, Pat Metheny and Michel Legrand. Particularly worthy of mention is Wakenius’ 11-year membership in the legendary Oscar Peterson Quartet until its leader’s death in December 2007.

Furthermore, for a couple of years Wakenius has been the accompanist of his fellow ACT artist Youn Sun Nah. Since the Korean star singer lives in Paris, the metropolis on the Seine, with its many jazz clubs and extraordinary versatile music scene, has been a regular destination for him. Moreover, it also became the source of inspiration for Vagabond: in addition to guest appearances by Nguyên Lê and Youn Sun Nah, who performs a version of the Police classic “Message in a Bottle” with remarkable simplicity, it was Paris, where he met the accordionist Vincent Peirani, which shaped the album.

In 2003 Peirani made a much-noticed performance at the La Défense Jazz Competition when he was still a student at the Paris Academy of Music, and he has been a staple of the jazz scene in Paris ever since. Performances with Michel Portal, Renaud Garcia-Fons, Daniel Humair and Louis Sclavis, or with his own projects, such as in duet with Vincent Lê Quang, with a rock quartet or a world music quintet, as well as in the fields of chanson and classical music with artists like François Salque, Laurent Korcia, Roberto Alagna or André Minvielle – all this has proven that Peirani can be considered the rising star of the great French accordion tradition, with such famous representatives as Richard Galliano.

On Vagabond Peirani demonstrates that he has already found a unique style that works in different genres and perfectly fits Wakenius’ guitar. His accordion occasionally mimics the sound of a human voice, as heard most clearly on “Breakfast in Baghdad” - originally composed by Wakenius for Youn Sun Nah and featured on her album Same Girl (ACT 9024-2).

Wakenius‘ previous albums on ACT have been focused on one theme. On Notes from the Heart he interpreted Keith Jarrett’s music, and on Love is Real he centred on Esbjörn Svensson. On Vagabond it becomes apparent that as a globetrotter Wakenius is driven by curiosity for all sorts of good music and he proves himself as a truly versatile guitarist - from the French “Bretagne” and the Nordic and almost hymnal sounds of “Psalmen” by his friend and fellow musician Lars Danielsson, to archaic Native American tones of Jim Pepper’s “Witchi-Tai-To”, and from the South American “Chorinho” to the Asian sounding “Song For Japan”. Wakenius sends the listener musical postcards from all over the world and merges them into a fascinating travel report.

The album is also a family affair. For the first time Ulf Wakenius worked together in the studio with his son Eric, who is obviously following in his father’s footsteps as a guitarist, as heard on the title song that they composed together. In addition, they perform Attila Zoller’s wonderful “Birds And Bees” as a duet. Wakenius sums up by saying, ”It’s the best album I have ever made.”

Charles Trenet (composer)More information
01-07-2014 Heaven
"Momento Magico is a varied instrumental album and a masterclass in one, in which Ulf Wakenius his mastery of the acoustic guitar, displays in all keys."
13-05-2014 Music Frames
"‘Momento Magico’ is still a remarkable record of top musician Wakenius who shows you the wonderful world of the multifaceted guitar and he plays it fantastic!"