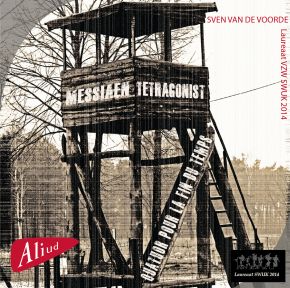 January 15th 1941: The premiere of Messiaen’s most performed work ‘Quatuor pour la fin du Temps’ in the theatre shed of Stelag
VIIa, a German work camp near the Polish border.

This work, which consists of 8 parts, centralizes the Apocalypse as it is portrayed in the Gospel of John. The musical language is essentially ‘immatériel, spirituel et catholique’. Messiaen dubbed himself a ‘compositeur- rythmicien’ and, alongside his preoccupation with harmonic development reflected in his wayward use of several modes, he was mainly concerned about the auditor’s listening experience. This concern was expressed , on the one hand, through added values and rhythmical palindromes, and on the other, through his often extremely low paces, always aiming to express the Christian mystical experience that results in eternity.
The ‘Quator pour la fin du Timps’ by O. Messiaen with its unique formation, is the central work around which the young TetraGonist Ensemble has taken shape…Which music, however, could function alongside this masterpiece
and maybe even shed a new light on it?

Clarinettist Sven Van De Voorde (°1988) started his musical career in Waregem at the ‘Stedelijke Academie voor Muziek’ with Annick Engelaere. He commenced higher education at the Ghent Conservatory with Eddy Vanoosthuyse. He is currently pursu­ing a Master’s degree at Helsinki’s Sibelius Academy with Olli Leppän­niemi, Harri Mäki and Kari Kriiku. Apart from being a clarinettist, Sven is also an accomplished accordionist. He studied accordion in Waregem with Frederik Caelen, and afterwards in the Ghent Conservatory with Philippe Thuriot and Tuur Florizoone. Sven won 2nd prize in the ‘Citta di Carlino International Clarinet Competition’ in 2011 and was finalist to the ‘Interna­tional Mercadante Competition’ and the ‘Internation Clarinet Competi­tion’ in Capri. He was selected from over 200 candidates to participate in the ‘International Nielsen Competi­tion 2013’ and in the ‘International Debussy Competition 2014’ in Paris. Nationally, he was awarded the first prize in Belfius Classics, not only for clarinet, but for accordion and cham­ber music as well.

Tetragonist is a young ensemble whose members are pianist Mathias Coppens, violinist Jens Lynen, cellist Lieselot Watté and clarinettist Sven Van De Voorde. The Tetragonist functions as a new, observing character next to the classical protagonist, antagonist and tritagonist. These roles are alternatingly interpreted by Mathias, Lieselot, Jens and Sven. In their opinion, all the aspects present in this quadruple relationship are the deepest source for all musical forms aiming to tell a story. They thus distinguish themselves from the average quartet by positioning hardly unknown repertoire alongside the standardised canon and by often engaging in a cooperation with another artistic organ which alternates with the quartet.