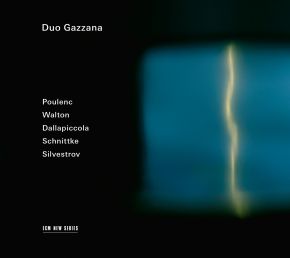 Alfred Schnittke's Suite in the Old Style is indeed a playful if unconventional allusion to compositional style of the past. Hommage à J.S.B., by the Ukrainian living composer Valentin Silvestrov, evokes variations on themes of the Leipzig master. Similarly Luigi Dallapiccola, in his divertissement Tartiniana seconda, responds with contrapuntal mastery to the music of the Baroque composer Giuseppe Tartini. William Walton's rarely heard Toccata, written when he had just turned 20 years old, virtually overflows with structural ideas related to the virtuosic demands of traditional toccata form. The cadenzas for both the violin and the piano call for quasi-improvisational skills that draw rhythmic impetus from jazz. Vitality and vehemence inform also Francis Poulenc's dramatic Sonate, here representing the evolution, on a structural and formal basis, of the simplest and earliest musical forms (toccata, suites, divertissement and variations) used in the compositions of this album. Written in 1942-43 it is dedicated to the memory of the Andalusian poet Federico García Lorca. A line, from one of his poems: 'La Guitare fait pleurer les songes' (The guitar makes dreams weep) inspired the second contrasting movement, an expressive intermezzo in the manner of a dirge.

The Gazzana sisters, Natascia and Raffaella, were born in Sora near Rome and formed the Duo Gazzana in the mid-1990s. Their joint musical education allowed them to develop a great sensitivity toward the conversational demands of subtle chamber music; moreover, they both took additional degrees at La Sapienza University in Rome – Natascia in visual arts, Raffaella in musicology, presenting a critical review of Walton's Toccata for her dissertation.

The two artists studied in Rome, Geneva, Brussels, Siena, Lausanne, Fiesole and Salzburg and received inspiration from a large number of prominent teachers, including Bruno Canino and the Trio di Milano, Yehudi Menuhin, Corrado Romano, Uto Ughi, Piero Farulli, Pierre Amoyal, Pavel Gililov and Ruggiero Ricci. They have given recitals in many European countries, Africa, Oceania and Asia and cultivate special relations with the Far East, including guest performances in Japan, Vietnam, South Korea, Singapore and Hong Kong, where they have also held master-classes. Fives Pieces, their first recording for ECM New Series, featuring works by Takemitsu, Hindemith, Janáček and Silvestrov, was released in 2011.