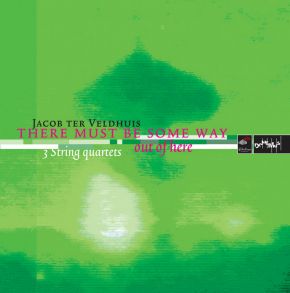 There Must Be Some Way Out Of Here - Three String Quartets

String Quartet No.3 There must be some way out of here

The Third String Quartet demonstrates Ter Veldhuis’s capacities as a storyteller. Its subtitle There must be some way out of here is a quotation from All along the watchtower by Bob Dylan. A song that particularly embodies the philosophy of life as expressed by the rock generation from which Ter Veldhuis stems.
There must be some way out of here, said the joker to the thief.
There’s too much confusion
I can get no relief...
The text can be seen as optimistic or despairing, but also as encapsulating an idea to be explored. That is the spirit in which the Third String Quartet was conceived. The music is all about sound, about the forces of attraction and repulsion revolving around the central note ‘D’. And for Ter Veldhuis sound also means harmony. In that sense, There must be some way out of here is a search for a harmonic ‘resolution’: in the words of the composer far from the ‘faded avant-garde, from threadbare conceptualism and postmodernism.’ This search yields a huge spectrum of events: a maze of side roads, abrupt transitions and apparent lacunas. The search for a new aesthetic for Ter Veldhuis, however, does not mean falling back into a romantic idiom. On the contrary: the Third Quartet is in essence one large crescendo, with striking elements drawn from rock and blues. Originally the composer wanted to call it ‘Life and the Boy’ because of its extraordinary energy, and as a deliberate inversion of Schubert’s Death and the Maiden.

The first version of Postnuclear Winterscenario was written in January 1991 shortly after the outbreak of the Gulf War. Meteorologists predicted catastrophic climatic and envi- ronmental repercussions, comparable to the aftermath of a nuclear war. Initially stunned by the threat of this post- nuclear winter scenario, the composer was finally driven to translate his feelings into music.
Within hours he had written a piece for solo piano whose musical material is reduced to a bare minimum. Probably the most simple music he has ever written, it nevertheless communicates itself with enormous intensity.
The original version led on to various concepts: for solo guitar, guitar duo, percussion duo and percussion ensem- ble, mixed choir and finally also a concept for a string quartet.
In the end Jacob ter Veldhuis wrote two versions for string quartet: the sober ‘Amsterdam version’ written in 1994 for the Dufy Quartet and the more lyrical ‘Rotterdam version’ for the Netherlands Quartet.
During the rehearsals prior to the recording sessions, the composer became aware that the musicians of the Netherlands Quartet felt little affinity for the sober, spartan music of Postnuclear Winterscenario in its original version. And so Ter Veldhuis composed an entirely new quartet, the ‘Rotterdam version’, which is taylor-made for the Netherlands Quartet.

Versailles was inspired by 17th-century landscape gardening. The gardens of the Palais de Versailles were a symbol of centralized power. A severe, symmetrical garden-arrangement formed the basis for a wealth of ornamentation which was achieved by subjecting all plants to rigor- ous trimming. Nature was subordinated to art.
The 17th-century landscape architect undoubtedly saw his creations as an earthly paradise. The opposite powers of unbridled nature, on the one hand, and all-controlling man with his trimming knife and hedge-clippers, on the other, form a tragicomic dualism. This theme, however, has become a worldwide problem of survive or perish.
A composer tries to arrange his tones just as the landscape architect does his plants, statues and fountains. The components of symmetry and repetition have a determining factor on the form of the baroque garden. In Versailles, Ter Veldhuis applied these techniques to the musical composition. The outcome is a neo-baroque divertimento for string quartet. There are four movements.

I Parterre de pièces coupées pour des fleurs
An important element in the baroque garden is the parterre, a rectangular area containing symmetrical and fancifully modelled flowerbeds surrounded by small hedges and accentuated by little ornamental trees. The movement is based on an untempered hedge-clipper’s motif in contrary motion. During the absence of the gardener the plants run wild but, thank God, in te end the inevitable hedge- clipper brings everything back under control.

II Labyrinth
The Labyrinth of Versailles was destroyed long ago. It was a square plot of land with dense covering of countless shrubs. The many pathways that traversed it merged so imperceptibly one into the other, that one very easily got lost. Here, two lovers (first violin and cello) wander about endlessly along identical footpaths.

III Disposition générale d’un grand jardin
The ‘Disposition’ is based on symmetry, contrary motion and repetition of the layout of the ‘ideal garden’, as discussed by Joseph Dezallier d’Argenville in his manual La Théorie et la Pratique du Jardinage (Paris, 1709).

IV Trianon de Porcelaine
In 1670, Louis XIV built a country seat to please his mistress the Marquise de Montespan. He bought the poor village of Trianon and had it raized to the ground. The name, however, was retained for its beautyful sound. The new buildings were plastered with blue and white porcelain, in imitation of the Chinese pagoda at Nanjing. In nearly all seasons the garden was a variegated sea of flowers, filling the air with the sweet scent of blossom. In 1687, when the Marquise fell into disfavour with the King who was seeking a change, the Trianon de Porcelaine was demolished to make way for the present Grand Trianon. The music in this section is a small contemplation of transience, in memory of a forgotten little village and a forgotten pleasure garden.