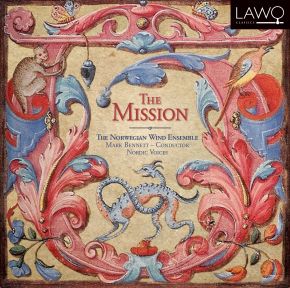 THE MISSION — MUSIC FROM “THE NEW WORLD”
The point of departure for The Norwegian Wind Ensemble’s new CD The Mission is the meeting of European ‘serious’ music and indigenous ‘traditional’ music of the 17th and 18th centuries. The result is a vibrant mixture of lovely music, spirited dance rhythms, and Latin American temperament.

The repertoire on this album consists of historic music, primarily of the Baroque era, which blends with the animated local playing styles and rhythms. Some of the music is from old scores discovered during the restoration of rundown churches in Bolivia — music with links all the way back to Jesuit efforts in the 1500s to spread Catholicism and Christianize the indigenous Indians. The Baroque music is
coloured by the native rhythms and resurrected in the splendid arrangements of Stian Aareskjold, who plays trumpet in the ensemble and has served as musical director of this project. Also collaborating on the album is trumpeter and conductor Mark Bennett and the singers of Nordic Voices.

The Norwegian Wind Ensemble is a professional orchestra based in Halden. With its 280-year history, it is Norway’s oldest orchestra. The ensemble consists of 24 musicians and is known for its wide-ranging musical repertoire. It performs ca. 100 concerts annually for around 20,000 listeners. Nordic Voices is a classical six-voice a cappella ensemble regarded as one of the leading international vocal ensembles in its genre. It repertoire ranges from medieval to contemporary music.