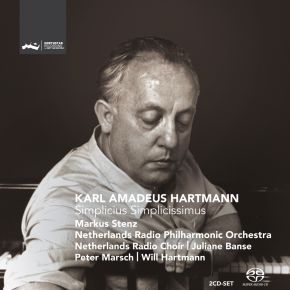 A native of Munich, Karl Amadeus Hartmann (b. 1905, d. 1963) ranks among the leading German composers of the twentieth century. A substantial portion of his œuvre, which includes eight symphonies and chamber works, had its origins in one of the darkest periods in world history – from 1933 to 1945 – when the Nazis were in power. This period, in which Hartmann gradually withdrew from public life and which eventually culminated in his own innere Emigration (inner emigration), represented a decisive turning point in his creative development. Before that time, Hartmann had adopted a playful, neoclassical style influenced by jazz and Dadaism with which he had hardly distinguished himself from his contemporaries. With no prospect of a performance of his work in sight, he subsequently created a musical language which, besides bearing the influences of Bach, Bruckner and Beethoven, was also highly indebted to those composers whose music the Nazis had banned, such as Mahler, Berg, Stravinsky, Prokofiev and Bartók. He employs this language not only in his symphonies and many of his chamber works, but also in his opera Simplicius Simplicissimus, based on the 1669 novel Der abenteuerliche Simplicissimus by Hans Jakob Christoffel von Grimmelshausen. The full title of the second version, presented here, is Simplicius Simplicissimus: drei Szenen aus seiner Jugend.

I'm writing an article on this superb captation. Any clue to find the libretto in English? Sincerely

Our SuperAudio cds can be played on all cd players

Are these CD's playable on (most) normal CD-players (hybrid SACD) or do I need a SACD player?

Dear Paul Randall and Dennis Davis, This set is including a hardcover book containing liner notes and synopsis in English, German and Dutch. The libretto is also included, but only in German and is unfortunately not translated to English. Best wishes, Challenge Classics

Thanks for recording this. Ditto, does the set contain the libretto and an English translation please?

Does the set contain the libretto and an English translation please?

A powerful piece, given an astonishing sense of drama and force by Markus Stenz, the rich orchestral playing every bit as vivid as singing."

01-09-2014 Die Deutsche Bühne
"Our recommendation
The clarity of the musical articulation, the naturally disposition of this complex acoustic world, the passionated play bring the described process of transformation to life."

01-07-2014 Fono Forum
"Fresh and timeless, with the right mix of enthusiasm and sensitivity, the right balance between musical amusement and intimacy, this Dutch "Simplicius" is an enrichment of every Hartmann discography."