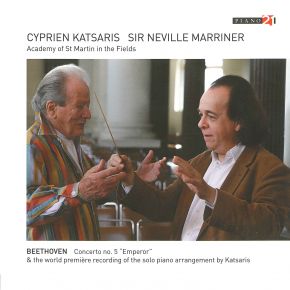 This CD sees Cyprien Katsaris and Sir Neville Marriner conducting the Academy of St Martin in the Fields united in a performance of Beethoven’s Concerto no. 5, op. 73 but also (and more importantly), featuring an arrangement by Katsaris for solo piano.

Why construct an arrangement for solo piano? Familiar from a very young age with a vinyl recording in his parents’ collection of the “Emperor” Concerto by Vladimir Horowitz with the RCA Victor Symphony Orchestra conducted by Fritz Reiner, Cyprien Katsaris had always felt a degree of frustration regarding the orchestral passages he was appalled not to find them in the piano score, hence his determination, at 55 years of age, to produce this transcription.

Maestro Katsaris performed this transcription to a standing ovation at the Wigmore Hall in London in June and appeared on BBC Radio 3's In Tune programme to coincide.

Reviews from the concert said of Katsaris' performance:  "At turns uplifting, then restful, to an amazing extent – the conclusion of the first movement so brilliant that Katsaris had to shush the spontaneous applause it necessarily ushered. The Adagio proved arresting, and the Hall fell to stillness. No such formalised break before theRondo which made for a staggering contrast. Cyprien stood to roars of approval, countless listeners also on their feet."

This disc will be reviewed in the September issue of BBC Music Magazine and there will also be a feature in Pianist Magazine.