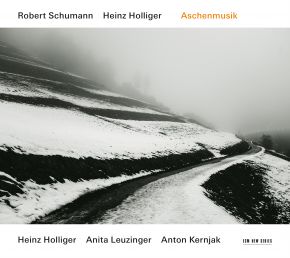 Heinz Holliger’s lifelong fascination with the music of Robert Schumann finds further expression on this newest release: on Aschenmusik, a new interpretation of the Swiss oboist-composer’s “Romancendres” is framed by Schumann’s own works. “Romancendres” refers to the lost “Cello Romances” which Clara Schumann burned on Brahms’s advice, an act of destruction which outraged Holliger and fuelled the composition of this “music from the ashes” in 2003. It’s a portrait of Schumann, packed with quotations, projected like a lifetime passing through the mind of a dying man. “Romancendres” is prefaced by Schuman’s “Romances” for oboe and piano, masterpieces which have been part of Holliger’s repertoire for 60 years, and by the rarely-played “Studies in Canon Form” which find Holliger on the oboe d’amore. The album closes with Schumann’s first sonata for violin and piano, with cello substituting for violin. Holliger: “Schumann himself thought it could also be played on a cello. I find it grandiose with this combination of instruments.” Strong performances by Holliger himself and by Anita Leuzinger, solo cellist from the Zurich Tonhalle Orchestra, and by Austrian pianist Anton Kernjak make this album another important addition to Heinz Holliger’s ECM discography. Aschenmusik is issued in time for Holliger’s 75th birthday on May 21st.