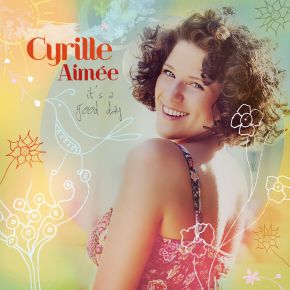 It's a Good Day

It's A Good Day is the first album by the widely acclaimed young jazz singer Cyrille Aimée to enjoy domestic release. Although she has been presented in major jazz clubs and concert halls all over the world, and produced her own recordings, It's A Good Day represents a major step forward for the rapidly rising vocalist.

Although the songs and styles represented on It's A Good Day exhibit a wide range of musical styles, eras, continents and moods, there are several over-arching ideas driving both the overall concept of the album and the specific song selections, the first being the international appeal of the album. "Even before I was 20, I had lived all over the world,” says Cyrille, “starting in [the French village of] Samois-Sur-Seine (where famed gypsy guitarist Django Reinhardt once lived) but also in Cameroon, Singapore and the Dominican Republic."

Cyrille's worldly outlook is reflected in her emphasis of the guitar, an instrument that has a home in nearly every culture of the world. Cyrille was first exposed to jazz through the Manouche gypsies who played in the spirit of Django Reinhardt – who, to this day, remains the primary inspiration for many jazz guitarists, gypsy musicians and European jazz musicians. As an adult, she settled in New York, where she continues to absorb the inner workings of American jazz and the traditional songbook. Traveling through the Western hemisphere, she also became fascinated with Brazilian music ­– her work reveals a thorough understanding of the bossa nova and the samba as well.

01-10-2015 Doctor Jazz Magazine
"[''] .. A pleasant company consisting of a happy, charming singer, one with charisma, accompanied by a quartet in gypsy style and an excellent class.""
19-08-2014 The New York Times
"Cyrille Aimée’s “It’s a Good Day” blends Gypsy bounce with chiming melancholy."
01-08-2014 DownBeat
"On her debut disc for Mack Avenue, Aimée—who was born and raised in France—cheerfully mixes ingredients from Brazilian music, Gypsy jazz and Americana, throwing in a version of Duke Ellington’s “Caravan,” a cover of a Michael Jackson hit (“Off The Wall”), Oscar Pettiford’s “Tricotism” and four original compositions along the way."
01-07-2014 Jazziz
"French singer Cyrille Aimée has been charming audiences since she was a precocious teen performing in the clubs and cafes of Paris. (...) Included here ist her Gypsy-jazz rendition of the Peggy Lee title track with extraordinary string work from Michael Valeanu and Adrien Moignar."