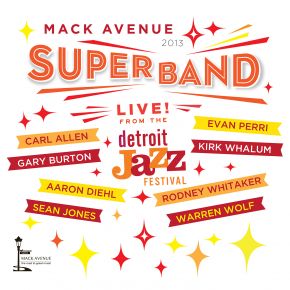 Live From The Detroit Jazz FestIval - 2013

For the follow-up, Al Pryor, Mack Avenue’s Executive Vice President for A&R, assembled a slightly pared-down unit. Back for round two are vibraphonist Gary Burton, trumpeter Sean Jones, guitarist Evan Perri, and the rhythm section of pianist Aaron Diehl, bassist (and music director) Rodney Whitaker and drummer Carl Allen. Joining the mix are veteran soul/jazz saxophone giant Kirk Whalum and the sensational vibraphonist-marimbist, Warren Wolf. The results are no less scintillating—a program as cohesive and precise as a studio recording, but infused with energetic vibrations emanating from the several thousand hip, enthusiastic fans who attended the free concert.

Whitaker attributes the bandstand discipline and simpatico in part to his determination to follow collective, inclusive principles in organizing the program. “I solicited everyone’s input,” he says. “With artists at this level, you don’t need to dictate every moment. Sometimes it’s more important to listen and facilitate, and not always try to be the boss. When you have a conversation with everyone about what music we’re playing and the direction we want to go, everybody buys in, and they make it sound like a band. We put together a set list two months before the concert took place.”

Whitaker discerns several common denominators that promoted camaraderie. One is the role of gospel music in the musical development of Whalum, Jones, Wolf, Diehl, Allen and himself during formative years. “Everyone—not just those who grew up in church—tries to tell a story in the way they play, in the way they try to touch an audience and say something to them,” he says. “They put together their solos to get across a message that music is not just about notes, but has some greater meaning, whatever you may translate that to mean.”

That communicative quality permeates the proceedings. So does the high level of mutual respect of each member for the musical abilities of all the others. “Everyone liked performing together,” Whitaker says. “You could feel it in the rehearsals. Everyone felt empowered. There was no hierarchy, no one playing the star. In 2012, the idea was more to have a showcase for everyone’s skill, and have people come on and off the bandstand. This year, Al and Denny wanted it to sound like a band, and that’s how all the musicians felt, too.”

“Soul Sister” featuring composer Wolf kicks off the set in fine fashion. The mid-tempo modal piece finds the composer elegantly stating the melody on his signature vibraphone then passing off to the marimba for a sure-footed and hard-swinging solo, opening the door for rhapsodic solos by label mates Whalum, Jones, Perri and Diehl.

Jones, 35, will release his seventh Mack Avenue session in 2014. He uncorks a sensitive flugelhorn solo on his never-before-recorded “Of Mars and Venus,” followed by Whalum’s flute solo. There follows a stirring rendition of Donnie McClurkin’s “Speak To My Heart” (reprised from Work To Do, the Allen-Whitaker group’s second Mack Avenue date), on which Jones, Wolf and Whalum raise a joyful noise.
The horns and guitar leave the stage for Diehl’s “Blue Nude” (from the 28-year-old pianist’s Mack Avenue debut, The Bespoke Man’s Narrative), which opens with a mysterious, sensuous section that resolves into a minor blues theme—think John Lewis meets Sonny Clark—on which Wolf and the pianist stretch out.

Burton’s pair of Mack Avenue dates with The New Gary Burton Quartet ( Common Ground, 2011 and Guided Tour, 2013) is as strong as anything in the iconic mallet player’s distinguished discography. He and Jones rejoin the quartet for “Chick’s Tune,” an early Chick Corea opus (it blends “You Stepped Out Of A Dream” and “Nostalgia”) that debuted on a 1964 Blue Mitchell LP titled The Thing To Do. Each soloist (Burton plays marimba with four mallets; Wolf plays vibraphone with two) displays his command of swinging change-playing over the relentless groove.

There follows a duo tour de force by Burton (marimba) and Wolf (vibes) on Wolf’s arrangement of Corea’s “Señor Mouse,” which Burton first played with the composer in 1972 on the ECM classic Crystal Silence, and which Wolf recorded for his self-titled 2011 Mack Avenue debut.

Burton exits and Whalum enters as the band takes on Allen’s “Relativity,” a modernist soul jazz tune with a feel not unlike Oliver Nelson’s “Stolen Moments.” Jones builds his clarion solo on principles of tension-and-release; Whalum flows through the changes with mellow, powerful tone; Wolf navigates the beats with a drummer’s precision.
Diehl’s Ellingtonian chords introduce gypsy jazz innovator Django Reinhardt’s late-period piece “Troublant Bolero,” on which Perri showcases his abundant chops, as he does with the Django/Stephane Grappelli-inspired Hot Club of Detroit, who have released four albums for Mack Avenue.

Whalum and the septet then address the modern gospel song, “I Want Jesus To Walk With Me,” which Whalum previously recorded on his 2001 album, Hymns In The Garden. In the classic soul tenor manner that he learned from mentor Arnett Cobb as a student in Houston, Texas, Whalum offers inflamed testimony, followed by a marimba solo by Wolf that sustains and intensifies the energy.
Spurred by Allen’s crisp, rounded beats, each member takes an idiomatic, white-hot chorus on the concert closer, Dizzy Gillespie’s bebop era anthem, “Two Bass Hit,” with Wolf on vibraphone and Burton on marimba.
When it’s done, you the listener may well feel inspired to follow the example of the packed Hart Plaza and deliver your own standing ovation.