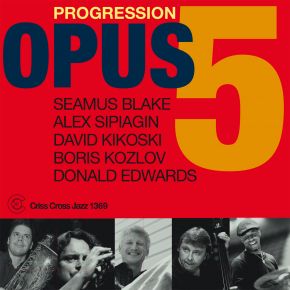 On its third Criss Cross recording since they made their 2011 debut with Introducing Opus 5, Opus 5 --- a collaborative quintet of New York A-listers Alex Sipiagin (trumpet) Seamus Blake (tenor sax), David Kikoski (piano and Fender Rhodes), Boris Kozlov (bass) and Donald Edwards (drums) --- continues to uphold the high standards that its steadily increasing fan base has come to expect.

Building on multiple tours over the last three years, and simpatico developed over their mutually extended tenure in various units devoted to Charles Mingus' music, they play the evocative tunes --- three by Edwards, two by Kozlov, and one apiece by Blake and Sipiagin --- with intelligence, creative abandon and cohesion, burnishing Opus 5's stature as 21st century inheritors and extenders of the legacy left by such predecessor quintets as Art Blakey's Jazz Messengers and Miles Davis' units of the 1950s and 1960s.