The code is valid one time and valid for a 10 days after receiving the promotioncode. Your emailaddress will only be used by Challenge Records International and will not be given to 3rd party advertisers. If you have any questions please contact us.
TITEL CD is added to your cart.
1184073075 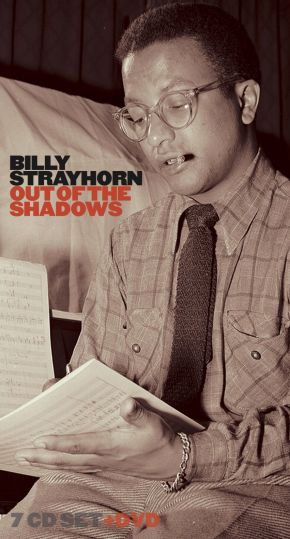 Out Of The Shadows

This superb box set celebrating the work of William Thomas Strayhorn echoes the basic paradox of an extraordinary jazz musician’s life and career.

The richness and diversity of the music it contains will delight the most obsessive Strayhorn aficionado; at the same time it offers a thrilling introduction to the man many know only as someone who once played in Duke Ellington’s band and wrote “Take The “A” Train.
The 7 CDs contain material presenting 62 of Strayhorn’s compositions, not only focusing on his work outside of the Ellington orchestra, but also presenting him in Duke’s company.

Billy Strayhorn, the man whose musical abilities could have made him a star in his own right, labored in the shadow of a world-famous benefactor. This collection of his recordings puts him firmly in the spotlight for once, revealing beyond doubt the true scale of the debt owed to him by Duke Ellington in particular and jazz in general.

Billy Strayhorn (composer)More information
26-07-2014 Jazzflits
"Also this Storyville-box puts Strayhorn in the bright light on which he is entitled."
25-06-2014 Friesch Dagblad
"With the music you can beautifully recognize how the approach changes over the years."