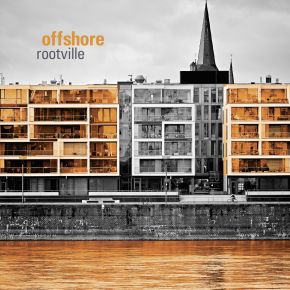 You can call that very rapid development: the quintet was formed in 2009 while they were still studying at Cologne Music College. After graduation in 2011 and several distinctions and prizes in competitions, their first recording "Côte de Cologne" (DMCHR 71117, Double Moon Records) was already issued in the established series for young, talented musician "Jazz thing Next Generation" in February 2013. Numerous tours followed, and then finally the recordings for "Rootville".  Following almost 100 performances in clubs and at renowned festivals (Jazzwoche Burghausen and WDR 3 Jazzfest, among others) the ensemble has grown together into a tight-knit group, who understand the sophisticated but catchy compositions of Dierk Peters and Constantin Krahmer and bring them to life. The individual sound of the band is becoming increasingly distinct, which of course also is connected with the unusual combination of instruments (with piano and vibraphone). However, it is also connected with the roots of the musicians, which were made strong during their shared time of studies. In spite of that, the bridgehead succeeds to contemporary and above all personal, mature fashioning of their music. The ballads radiate an enormously relaxed attitude, which reaches an almost mythical dimension in "Ballade pas sans batterie". On the other hand, there are songs such as "Der Neurosenkavalier" and "Metropulse" with pulsating grooves, intricate harmonies and rhythm changes. Offshore has developed into a very respected band after five years, which is appealing to an increasingly larger audience.
As with the previous CD, about half of the compositions are by the vibraphonist Dierk Peters, who is also one of the musicians most in demand in Germany.  He knows how to link highly virtuoso playing with a deep understanding of melodic structuring. In Offshore, there is additionally the blind understanding that connects him with the pianist Constantin Krahmer, the composer of the other pieces. This is especially important in a band, in which the two instruments are actually "competing". However, vibraphone and piano are unified into a common sound here, which can be outstanding in the service of the band as well as in solos. Saxophonist Christoph Möckel is also in great demand in the meantime and plays in several renowned groups. His sound, powerful but sensitive, has already become his trademark. In addition, his improvisations are borne by the will to create and surprising twists. Oliver Lutz has also become a recognized musician. He plays not only with established German musicians (Pablo Held, Jonas Burgwinkel, etc.), but also with internationally known ones such as David Binney and Donny McCaslin. His skills are especially in demand in Offshore: creative lines with rhythmic variety. The band's drummer also has these skills. Rafael Calman maintains the tension and drives his co-musicians on in grooving pieces. In peaceful passages, on the other hand, he succeeds in linking restraint with pure presence – a distinction for any drummer!
"Indeed, the quintet's impassioned collectivism shines throughout the program, amplified by thought-provoking compositions … And it's all effectuated by musicians who express musical maturity beyond their years." (Glenn Astarita – All About Jazz)