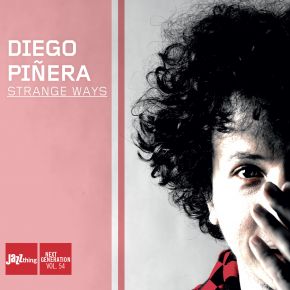 A great young drummer, percussionist and composer is at the point of his breakthrough, even though this is his first CD sold nationally and internationally. Sometimes paths take unexpected turns: "Strange Ways". However, you need not be a prophet to foretell an important role as jazz drummer for Diego Pinera in the coming years—and not just in Germany by far. As the name lets you suspect, Pinera is originally from Latin America. But neither his compositions nor his playing can be labeled "Latin Jazz" correctly or even completely. On this CD, you can hear not only very varied rhythmic stylistics from swing to bop to Latin, but also elegant melodies that make listening as light as feather. The high degree of complexity, which distinguishes the pieces both rhythmically and harmonically, almost remains unnoticed. The band, which Pinera has gathered around him, is hand-picked and of optimum quality. They have been performing together for years and developed impressive interplay. Even excursions into free passages are perceived as joint projects and not as ego trips. An absolutely successful album and another highlight in the renowned series “Jazz thing Next Generation"!
Diego Pinera was born in Uruguay and grew up in its capital Montevideo. His path took him early to the important station "Berklee College of Music", but also to the University of Music in Havana, Cuba. Then he came to Germany and Leipzig College of Music. His teachers were, among others, Bob Moses, Danilo Perez and Jose Luis Quintana "Changuito"—his role model till today is Antonio Sanchez. Pinera lives in Berlin today and has made a name for himself in numerous bands. He accompanied Katja Riemann as well as Jerry Bergonzi and has played alongside Danilo Perez, Nils Wogram, Alexander Sipiagon, Tony Lakatos, Paul Brody and many others. They all appreciate not only his stupendous virtuosity, but also his high degree of sensitivity and variability.

Peter Ehwald is not a stranger in the series "Jazz thing Next Generation"; he was a member of the band "Oktoposse" almost 10 years ago and consequently in the sixth release of the series. After several years in New York (where he also taught at City College), he again lives in Berlin and is one of Germany's most distinguished saxophonists. He can be heard on more than a dozen CDs and tours internationally. His playing is characterized by his continuously powerful sound–even in the soft passages.

Born in Munich, Tino Derado also spent a long time in the capital of jazz, New York, as Pinera did. During 13 years on that side of the Atlantic, he accompanied many renowned co-musicians from Randy Brecker to Dave Liebman and from Peter Erskine to Gary Burton. However, today he also lives in Berlin. Since his return, he has been a very busy pianist, regardless of whether with Till Brönner, Rebekka Bakken, Andy Middleton or the NDR Big Band.

The Briton Phil Donkin was already part of the crème de la crème of the international scene of jazz bass players a few years after he moved to New York and Berlin. He has played in numerous internationally renowned bands, recently with Dhafer Youssef, Nils Wogram Root 70 as well as shooting stars Marius Neset and Max von Mosch, among others.

01-02-2015 Downbeat
""It's easy to see why the abundantly talented Pinera was chosen for this edition of Germany's 'Jazzthing Next Generation' series of releases. He's a star in the making."

"Pinera also possesses a rare sensibility as a composer that sets him apart from other accomplished young rhythmatists on the kit."

"
26-11-2014 Jazzthetik
"Diego Piñera offers with with Strange Ways not only an impressive card as a drummer but first of all as a composer. The drummer from Montevideo presents a beautiful debut CD."