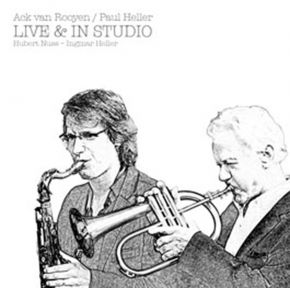 Ack van Rooyen and Paul Heller appeared on stage for the first time together in 1992. Since then, countless concerts, radio and TV productions, and four CDs have appeared under their shared direction. After more than 22 years of musical friendship and teamwork, van Rooyen (born 1930) and Heller (born 1971) have reconvened the line-up, with which they first shared their musical ideas back in 1992, for a "reunion".

The result is a double CD, recorded live in Cologne's Loft as well as in Bonn's Hansahaus Studio. A spontaneous, laid-back and wonderfully communicative musical exchange, celebrated by four musicians who speak the same language; carefree, expressive, with enormous depth and always straight from the heart.

Ack van Rooyen, Paul Heller, Hubert Nuss and Ingmar Heller make their way on an expedition across musical landscapes, encountering the familiar and the unexpected, avoiding beaten tracks and finding again and again the different expressions of beauty and integrity within the world of sound.

The very personal selection of standards and originals offers the four sonic aesthetes unlimited possibilities in giving their musical fantasies free rein to feed off each other, to respond to one another, and to give each other ideas that can be developed and brought back into the musical dialogue. Mentor and inspiration Ack van Rooyen has united four soul mates here, who with an overflowing enthusiasm play the old and the new in a timeless manner, as exciting as it is infinitely relaxing.