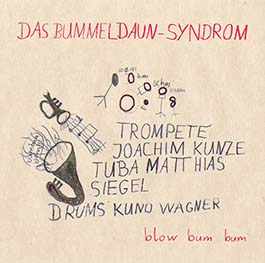 Why have DSDS (the German X-Factor) when there’s DBDS (Das Bummeldaun-Syndrom)!
And who says that brass bands always have to perform in a Big Band format? A trio's just perfect!
Das Bummeldaun-Syndrom show how it's done; two brass sounds (Joachim Kunze on trumpet and flugelhorn, and Matthias Siegel on the tuba) plus Kuno Wagner on the drums prove, as the smallest brass band in the world, that a reduction in personnel is not synonymous with a leaner sound.

"Blow bum bum", the first CD by these 'big' musicians in a 'mini' line-up turns into a brilliant adventure in sound. The sound can only be described as immense - and that’s in the most positive sense. Immense, because it’s simply astonishingly and astoundingly three-dimensional, the sounds that two wind instruments plus percussion can conjure up together in terms of complexity and variety. Punchy, sparkling trumpet lines, intense and with a lot of rhythmic foundation, DBDS drill their way, but never forcefully, into the ears of the audience.

All pieces were penned by the three men Kunze, Siegel and Wagner (every one of them can look back on a career in a wide variety of projects ) and they bundle together the cumulative experience of their lives, and that’s not just in terms of music. Each of their compositions also describes a small (or large?) moment in life: "Sleepless Night","BB 'N' B"," Abgebrochenes"? Let's just guess what’s being so personally and emotionally, yet so brilliantly and professionally presented to us!

01-09-2014 Jazzthing
"This Trio, that plays the music with a humorous remark and take their music seriously - a real insider's tipp!"