The code is valid one time and valid for a 10 days after receiving the promotioncode. Your emailaddress will only be used by Challenge Records International and will not be given to 3rd party advertisers. If you have any questions please contact us.
TITEL CD is added to your cart.
1386585523 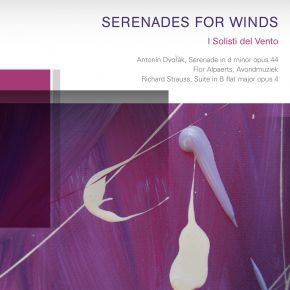 “The Sun is always shining in Dvorák’s music!”
This is what the otherwise dreaded music critic Eduard Hanslick is reported to have said. It is in the Serenades that, as Hanslick already said, the sun shines through each and every note!
We are inadvertently reminded of the graceful 18th century serenades: in the wind serenade, the same line-up as in Mozart’s Gran Partita. Yet Dvorák was by no means archaising. In the wind serenade, he expands the arsenal with a contrabassoon, a third horn and a string bass with cello and contrabass, whereby the sound becomes much warmer and it is this soft undertone that bespeaks the Czech fatherland.
For the young Richard Strauss (1864-1949) the world lay wide open: his father, solo horn player in the Munich Court Orchestra was the best horn player in Germany. Young Richard came into contact with the finest musicians who passed through the Munich Court Orchestra, and was himself seen as the new wunderkind of music. Hans von Bülow commissioned the 19 year old Richard Strauss to write a new, more extensive work for this orchestra. Strauss got down to work immediately, and when Hans von Bülow was kind enough to send him an outline for the four parts, two had already been written! In August 1883 Strauss had finished and sent the composition with a polite letter to von Bülow. In the winter of 1884, von Bülow came to Munich with the Meiningen Court Orchestra, and surprised Strauss by announcing that his suite for winds was on the programme of the matinee concert and that....Richard Strauss was to conduct it himself! “Thank you”, Richard replied, “but I have never conducted before! When is the rehearsal?” “An orchestra on tour has no time for rehearsals!” Von Bülow was categorical, and Strauss could not but concur.