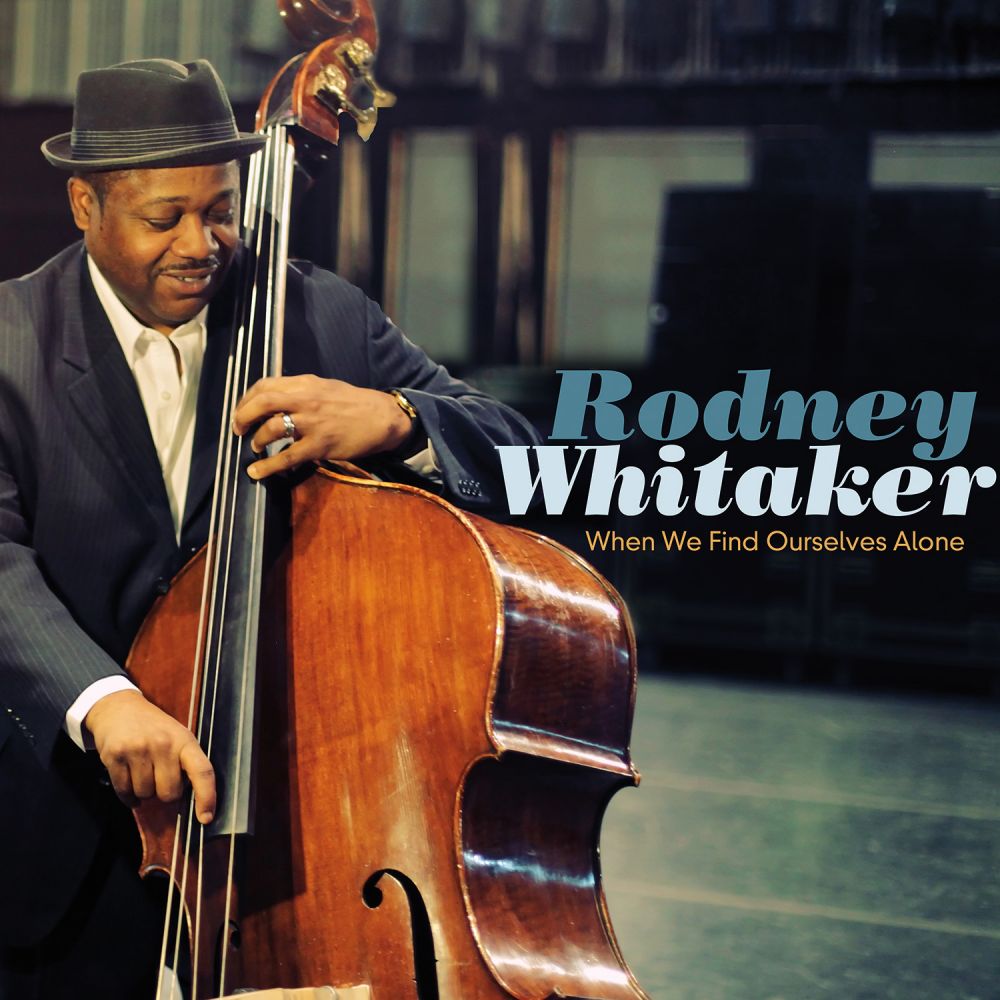 When We Find Ourselves Alone

"Mr. Whitaker, who plays with depth and resonance and constant swing; his single-note solo on “Invitation” hustles through sawed-off bebop phrases and seems to sing, up high and down low."

With When We Find Ourselves Alone, he gathers generational contemporaries and modern masters including saxophonist Antonio Hart, pianist Bruce Barth and drummer Gregory Hutchinson—each a friend and musical partner for close to a quarter-century. Reinforcing the family feel of the proceedings, Whitaker’s daughter, Rockelle Fortin, brings her expansive voice and keen interpretative skills to five selections. “Quartet with saxophone is really my voice,” says Whitaker. “I grew up playing in that context and with vocalists. When you’re from Detroit, you don’t compartmentalize or segregate music. You play funk, you play bebop and you play gospel.”
The ambiance on When We Find Ourselves Alone is similar to what Whitaker generated on such turn- of-the-century gems as Winter Moon, Ballads and Blues: The Brooklyn Session and Yesterday, Today and Tomorrow—all recorded for small independent labels—on which the leader drew repertoire from several stylistic tributaries. Now, as then, Whitaker and company address the leader’s 5 originals and 6 arrangements with an old-school feel and a 21st century attitude. They follow the time-tested jazz aesthetic, embracing the tradition of navigating the long-standing forms with individualistic tonal personalities, ebullient soulfulness and an unending will to swing.

“I think of what Carl [Allen] and I did on our records as 21st century soul jazz,” Whitaker says. “This record is closer to modern hard bop. It’s about swinging and having a good time. Even though I hadn’t gigged with any of them for years, there’s a certain freedom to playing with people you trust that you can’t get otherwise. I worked with Bruce from 1989 to 1991 with Terence Blanchard, and he’s like a big brother to me. I was on the road for 4 years with Greg and 3 with Antonio in Roy Hargrove’s group. They’re like my little brothers, and we’re all grown men now. All these guys knew my daughter as a child, and they hadn’t seen her since she was probably 10 years old.”
Whitaker relates the back story of the jaunty opener, “The World Falls Away,” a medium swinger propelled by Hutchinson’s crisp beats and highlighted by Hart’s impassioned, melodic declamation. “It was Valentine’s Day, and I’d had a bad day,” he says. “My wife gave me a card that talked about the rigors and challenges of life, and at the end said, ‘But at night, when we’re together and lying in each other’s arms, the world falls away.’”

A thread of joyous nostalgia infuses “When You Played With Roy,” an AABA theme with a bossa feel that contains a catchy 10-bar bridge. Whitaker’s brief opening solo displays his abundant technique and creativity, qualities that also animate Hutchinson’s exchanges with the soloists. “Everywhere I play, people approach me and say, ‘I loved it when you played with Roy Hargrove,’” Whitaker says. “I started thinking about turning that title into a theme that would capture the joy of performing with Roy and the joy people got from hearing the group live.”

Whitaker bows a plush introduction to “Autumn Leaves,” then switches to pizzicato for a dramatic rubato duo with his daughter, whose stately rendering of the lyric foreshadows a cogent scat solo once the tempo morphs to swing.
Hart’s pure soprano saxophone tone illuminates the poignant long notes that open “Jamerson’s Lullaby,” which references not only the immortal Motown session bassist, but also the sadness that Whitaker’s youngest son, Jamerson, age five, experiences when it is time to go to bed. Whitaker adds, “He looks at you and smiles, and it’s so infectious it makes you happy,”—in this case, a mood-switch denoted with a change to major key in the B-section.

Fortin channels her inner Carmen McRae on “You Go To My Head,” enlivened by Hutchinson’s neo-hip- hop pocket and ascendant solos by Hart, Barth and Whitaker. Then Whitaker creates a polyrhythmic bass line to maneuver “Invitation”—one of several homages to tenor saxophone immortal Joe Henderson that he has recorded—away from well-traveled routes.

There follows “Freedom Day,” an Oscar Brown song depicting the end of slavery at the end of the Civil War that Max Roach and Abbey Lincoln memorably recorded in 1960 on We Insist! After Fortin’s intense delivery of the lyric, and fierce statements by Hart and Barth, Hutchinson displays his rarefied position on the drum tree with a solo that dialogues with Roach’s drum oratory from half-a-century ago.
“I follow W.E.B. DuBois in thinking about music as a way to talk about politics,” says Whitaker. “We live in a time where we have an African-American President, yet people are angry at him solely because he’s African-American. We’re not free yet, though we think we are. But slavery didn’t just change the black man. It changed us all. We’re not ready to let go of oppression or the anger in our hearts.” Whitaker’s social activist concerns underpin “A Mother’s Cry,” a memorable refrain that he composed a few years ago for the documentary film Malaria & Malawi: Fighting to Save the Children, earning a Michigan Emmy nomination for the theme. Propelled by Whitaker’s ferocious 12/8 vamp and Hutchinson’s Afrodiasporic beats, Hart uncorks a magnificent soprano solo that evokes both the pain of malaria’s impoverished victims and possibility of a remedy.

In arranging “Mr. Magic,” Whitaker hewed to Roberta Flack’s early ‘70s hit that Grover Washington immortally interpreted as a soprano saxophone instrumental in 1975. Fortin elicits oceanic emotions from the lyric; Hart’s ecstatic solo signifies on his very first jazz saxophone hero. “It’s a song about joy, someone who found someone, treated them with love and took care of them physically,” Whitaker says.

Whitaker composed the title track two years ago for a commissioned work titled Jazz Up South on the topic of migration stories. “It’s about forbidden love between two people who are in love when people do not want them to be together,” Whitaker says. Turbulent solos by Barth and Hart evoke the inflamed emotions of love denied. “For me, the story is a metaphor for life, when people don’t pursue their dreams. My compass has always been to do first what brings joy to my life.”

Along those lines, Whitaker concludes this well-wrought portrait of the artist in mid-career with “Lost In You Again,” a modern gospel classic by Fred Hammond, illuminated by Barth’s and Hart’s jubilant solos. “The spiritual realm is part of my upbringing, and if I’m telling a story or putting together a set, I want to attend to the whole person,” Whitaker says. “I want to talk about every aspect of life and love and tragedy. Sometimes you’ve got to talk about the unpleasant to get to joy, but ultimately it should all end with joy.”

Whitaker, a father of seven children, has devoted much attention to building a world-class Jazz Studies Department at Michigan State University (which in 2013 conferred on him the honor of Distinguished Professor of Jazz Bass). In addition to a first-class faculty ensemble, the MSU Professors of Jazz, Whitaker formed a co-led project with drummer Carl Allen that generated the critically acclaimed, pocket- heavy Mack Avenue recordings Get Ready (2007) and Work To Do (2011). More recently, Whitaker has also served as bassist and music director for the Mack Avenue SuperBand, a group of label all-stars convened for the 2012 and 2013 editions of the Detroit Jazz Festival, and documented on Live From The Detroit Jazz Festival – 2013.

Initially a dedicated violinist, Whitaker switched to bass in junior high school. His band director taught him harmony, and he evolved conceptually in a teenage group called Bird/Trane/Sco/Now!, led by Donald Washington, Whitaker’s string instructor in sixth and seventh grade. During these years, Whitaker also participated in trumpeter Marcus Belgrave’s jazz group, performed European classical music with the Detroit Civic Orchestra, studied privately with members of the Detroit Symphony, and worked with such Motor City luminaries as pianist Kenn Cox and drummers Leonard King and Francesco Mora Catlett. A devotee of Paul Chambers and Ron Carter from the jump, Whitaker also considers Ray Brown, Oscar Pettiford, James Jamerson and Dave Holland to be crucial influences on his style.
After leaving Detroit in 1988 with the Donald Harrison-Terence Blanchard Quintet, Whitaker joined Hargrove in 1991 for a four-year run. During 1995 and 1996, when he freelanced with Elvin Jones, Kenny Garrett and Diana Krall, Whitaker recorded his first two CDs, Children Of the Light and Hidden Kingdom, both comprised primarily of original music. In 1996, Wynton Marsalis hired him to play with the Lincoln Center Jazz Orchestra. “Working with Wynton was probably the closest I ever got to going to graduate school,” Whitaker says. “I got to play so many different styles, and was inspired to learn the history of the music in depth. It made me realize that music is not just about notes. It’s about a story and it’s about lives.”

Mr. Whitaker, who plays with depth and resonance and constant swing; his single-note solo on “Invitation” hustles through sawed-off bebop phrases and seems to sing, up high and down low.
NY Times, 29-8-2014