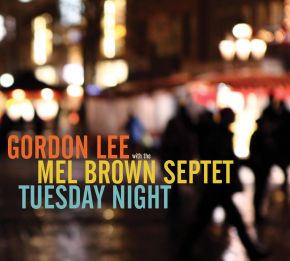 Since 1998, pianist Gordon Lee has been a mainstay with drummer Mel Brown's hard-swinging sextet as they've played to packed rooms every Tuesday Night at Jimmy Mak’s in downtown Portland. Known for its adherence to the “hard bop” sounds of Art Blakey, Horace Silver and Wayne Shorter, Lee's compositions follow in that style, but with new 21st-century twists. His first recording with the band, “Gordon Bleu,” led to them winning the 1989 Hennessy Jazz Search, where they beat out 700 other groups from around the world. “Tuesday Night” is the long-overdue second recording of this inspired, soulful band and a tribute to the enduring legacy of drummer & bandleader, Mel Brown.