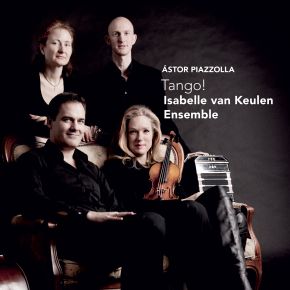 Isabelle van Keulen is a Dutch top violinist who performs all over the world as a soloist and in chamber music ensembles.
Isabelle van Keulen got an LP of Astor Piazzolla as a present as a young six year old and since then has been a tango music lover ever since! She long wanted to play this music in an ensemble and now her dream comes true with not only a SACD but also a film on DVD and BluRay The film is a moving musicproject filmed by director Hans Pannecoucke and his filmcrew! With the BluRay there is also available a bonus behind the scenes documentary! The atmosphere of the film and documentary gives a good idea of the feeling the musicians have with this beautiful heartfelt music and with each other! The tango ensemble consists of -besides Isabelle- bandoneonist Christian Gerber, pianist Ulrike Payer and double bass player Rudiger Ludwig Ludwig is a double bass player of the NDR Radiophilharmonie in Hannover and is Isabelle's partner Van Keulen's breakthrough was in 1984 winning the BBC Young Musician  of the Year This competition was broadcasted all over Europe and watched live on television by millions Her versatility lies in the fact that she not only plays the violin, but as well viola with the same energy, performing chamber music in any thinkable combination and directing chamber orchestra performances Isabelle van Keulen is professor for violin, viola and chamber music at the Luzern University of Artsin Switzerland since autumn 2012 Autumn 2012 Isabelle van Keulen was jury member of the popular AVRO series Maestro, prime time television