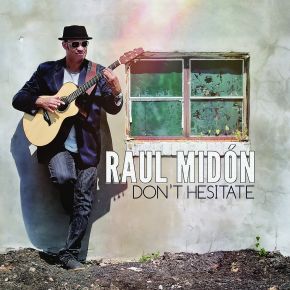 A smoothly expressive singer, an emotionally insightful songwriter and an exciting, innovative acoustic guitarist, Midón maintains an expansive musical vision that’s led People magazine to call him “an eclectic adventurist” and Huffington Post to dub him “a free man beyond category... he plays with such freedom and joy that his hands smile.” The New York Times described him as “a one-man band who turns a guitar into an orchestra and his voice into a chorus.” Billboard called him, simply and aptly, “a virtuoso.”
Search for “Raul Midón” on YouTube and you’ll find a clip of him appearing on The Late Show With David Letterman in 2006. Performing “State of Mind,” the title track from his major-label debut, Midón unveils what would become his signature combination of silky tenor voice and percussive guitar style. His guitar playing is a syncopated, flamenco- and jazz-infused wonder in which bass, harmony and melodic lines fly from the fret board in a way that seems to belie the fact that all the music is being produced by just two hands. If that weren’t enough, Midón busts out his improvisational mouth-horn technique, in which he creates a bebop “trumpet” solo entirely with his lips, earning himself a spontaneous burst of mid-song applause from the audience in the process.
While Midón’s eclectic talents have won the admiration of fans and critics, they’ve also led to him collaborating with such musical heroes as Herbie Hancock, Bill Withers and Stevie Wonder; appearing on recordings by Jason Mraz, Queen Latifah and Snoop Dogg; and contributing to the soundtrack to Spike Lee’s She Hate Me.

The forward-thinking, habitually restless Midón continues to take on new creative challenges on Don’t Hesitate. The 14-song album finds his infectious, personally-charged songcraft as sharp and soulful as ever, manifesting an organic blend of R&B, jazz and Latin elements that accentuate the lyrical and melodic resonance of such memorable new tunes as “Libertad,” “Was It Ever Really Love,” “God’s Dream” and the rousing title track, as well as an inventive reboot of The Who’s classic-rock standard “I Can See for Miles.”
Don’t Hesitate is a musical and personal milestone for Midón, who took control of every aspect of the album’s recording process, despite being blind since birth. The artist cut all of the tracks in his home studio, playing most of the instruments himself and handling all of the project’s technical elements on his own, utilizing special computer software that enabled him to engineer the sessions.
“The whole process was unlike any other record I’ve made,” Midón explains. Don’t Hesitate finds the singer-guitarist adding producer-engineer to his portfolio of talents. “Most of it was done in my basement, and I dealt with all the technical issues myself. It began with me setting daily tasks, which was that when I’m not on the road, I’m going to get up every morning and work on music. And eventually I realized that I was making a record. It was a day-in, day-out process of working through problems and figuring things out; ‘OK, how do I make this happen, how do I get this to sound the way I want it to?’ And I had to learn to balance the technical concerns with all the normal creative things of getting your songs and performances right.”
“There’s not a whole lot of trickery involved in this album,” he adds, “but it still has that edgy, eclectic quality that I like, and I’m playing some instruments that I don’t really play. Like the charango—I have a beautiful charango and I don’t really know how to play it, but I figured out how to play what I wanted out of it.”

Although Midón handles most of Don’t Hesitate’s vocals and instruments himself, some notable guest artists stepped up to contribute to the album. He duets with world-class vocalists Dianne Reeves and Lizz Wright on “Make It Better” and “Keep Holding On” respectively, while noted jazz bassists Marcus Miller and Richard Bona lend their talents to “Mi Amigo Cubano” and “If You Want Me To,” and the acclaimed sibling duo of Daniel and David Bailen are featured on the catchy “All You Need.”

Another noteworthy contributor to the album is R&B legend Bill Withers, who has largely withdrawn from the spotlight in recent years, but whose longstanding admiration for Midón was enough for the veteran icon to suggest that they try writing together. The result is the lilting, tropical-flavored “Mi Amigo Cubano,” whose Spanish lyrics mark it as a departure for both artists. Midón and Withers can be seen working on the song in the 2009 Withers documentary Still Bill.

The openhearted sense of adventure that propels Don’t Hesitate has been a constant in Raul Midón’s life. Born in rural Embudo, New Mexico to an African-American mother and an Argentinean father, he grew up surrounded by music, thanks in part to his father’s diverse record collection, which ranged from classical to bebop to modern avant-garde composers. After taking an early interest in drumming, Raul gravitated towards guitar during early childhood. After attending the University of Miami, where he participated in that school’s prestigious jazz curriculum, he became a part of that city’s music scene, gaining attention for his own live gigs while becoming an in-demand backup singer for such Latin-pop artists as Julio and Enrique Iglesias, Shakira and Alejandro Sanz. In total, he recorded background vocals on more than 60 albums.

Although he was making a good living singing backup in Miami, Midón felt the need to pursue his own music. Thus in May 2002, he walked away from his lucrative life as a sideman and moved to New York City in order to focus on his solo career. There he met and began writing and recording with renowned DJ Little Louie Vega, with whom he toured Europe, Japan and Australia. Meanwhile, he played whatever solo gigs he could, developing the forceful, show-stopping performance approach for which he’s now known. Although that style is now his trademark, it was initially borne of his efforts to grab the attention of distracted barroom crowds.
“My first regular gig when I moved to New York,” Midón recalls, “was playing in this bar on the West Side, between sets by a Top 40 band, surrounded by a lot of drunk people. And here I come with just an acoustic guitar, so you’ve got to find a way to get them to pay attention. So I took a warrior approach.

It was, ‘OK, I’m not just another singer-songwriter singing about sensitive things. I’m gonna show you something that you’ve never seen before.’ That was a great education, and I still approach it that way.
“Every time I do a performance,” he says, “I’m working on something, whether it’s diction or pitch or a certain guitar technique. When I’m up on stage, I clear my mind of everything else, and I give people the best of what I’ve got at that moment. Some nights I’ve got more than other nights, but I never phone it in, and I never treat a gig like it’s less important than any other gig. And I’d like to believe that people can feel that. They’re seeing me as pure and truthful as I can be.”
Midón’s growing reputation as a live performer helped him to win the attention of legendary producer Arif Mardin, who signed him to his first major-label deal. Midón’s 2005 album State of Mind was greeted warmly by fans and critics alike, as were 2007’s A World Within A World, 2009’s Synthesis, and 2012’s self-released live CD/DVD Invisible Chains: Live from NYC, which solidified the devotion of a fervent fan base that spans the globe.
The vibrant creative spirit that animated those albums reaches a new level of inspiration on
Don’t Hesitate, underlining Raul Midón’s stature as a one-of-a-kind artist whose lifelong pursuit of musical transcendence is an ongoing quest.

“I think that what people respond to with me is that there’s no trickery about what I’m doing,” Midón concludes. “I’m just singing and playing and trying to be as honest as I can be. For me, the best recordings capture moments of real life, and that’s what I’m trying to do.”