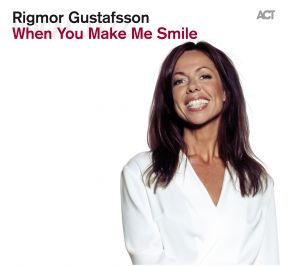 When You Make Me Smile

Rigmor Gustafsson was never one of those brooding, introverted singers. The Blues were never her thing either, even though she definitely knows how to arouse emotions with powerful ballads. But no, that would mean pretending to be something she is not, and pretence is pretty much the last thing that comes to mind when you think of Gustafsson. Having grown up on a farm in Värmland in the heart of Sweden, learned her trade in New York and become a star all around Europe, she is the kind of girl who wears her soul on her sleeve. With her naturalness she enchants her audiences, and for them she gives her all. It comes as no surprise that the word “you” can be found in the titles of all of her ACT albums, like on her sixth and latest “When You Make Me Smile”.

Gustafsson has always known that her personality comes out best when singing melodious jazz. To do that realisation justice, she seeks out special music-making constellations and fascinating combinations, like with pianist Jacky Terrasson (“Close To You”) or with the radio.string.quartet.vienna (“Calling You”). Opulent jazz, where possible refined with strings, has always been a special love affair of hers, something that can also be recognised in her interpretation of the film melodies of Michel Legrand (“On My Way To You”).
On “When You Make me Smile”, she now takes this to the next level: In addition to her “working band”, with the trusted companions Jonas Östholm on the piano, Martin Höper on bass and Jonas Holgersson on the drums, she not only gathers an illustrious team of guests around her, like the woodwind and flute player Magnus Lindgren, trombonist Karin Hammar and guitarist Max Schultz, but also an almost 30-strong orchestra. Together with the Dalasinfoniettan, one of the leading orchestras in Sweden, with a wealth of experience in many different styles, the music shines in symphonic splendour and is lent a colourful expressiveness. This represents the fulfilment of a heartfelt dream that Gustafsson has had for a long time.

And so it is that on “When You Make Me Smile”, orchestral vocal jazz resonates in a way that hasn’t been heard for many a while. Already the intro “Call Me Lonely”, with its hymnal sonority, is reminiscent of the era of sumptuously staged masters the likes of Paul Anka or even Blossom Dearie.

Gustafsson and her companions exploit every opportunity that the large scale offers:  from up-tempo numbers like “A Different Kind” and airy Burt Bacharach-like songs such as “If Dreams Are Made of Sand” to classical swing the likes of “Blind As A Bat”, light bossa like the title track and pithy organ-soaked soul numbers like “I Get Along” through to neo-blues like “Woke Up On Sunday” and touching melancholy ballads like “Stay, Stay, Valentines Day”. A vocal duet is also more or less a compulsory part of this programme: On “Let It Go” there is a surprising reunion with Eagle-Eye Cherry, the son of trumpeter Don Cherry, who grew up in Sweden and who now, after his worldwide successes like “Desireless” has gone back to reside in his homeland.

Although, indeed perhaps precisely because, Gustafsson quite openly continues on with tradition, “When You Make Me Smile” is perhaps her most personal album. She leaves her very own personal impression on all of the tracks, with her vocals and her radiating overall musical concept. Because together with her Swedish fellow man Ollie Olson Gustafsson not only wrote most of the songs, she produced the album as well. Interpreting major songs is an art, writing them is a gift, and it is one that Gustafsson is also endowed with.

”This is a dream come true. I started to write songs together with the lyricists Tomas Bäcklund and Ollie Olson about two years ago and contacted Dalasinfoniettan, an absolutely fantastic Swedish orchestra that I love, and have worked with several times earlier. For a short while I was thinking that there are already so much lovely music out there to record, but felt very fast that for me it’s natural to compose new material. It has been both a freedom and a challenge to have an orchestra available. Freedom, simply because a big orchestra gives so many possibilities, especially sound wise. Challenge, because I’m used to smaller constellations with another flexibility and different possibilities to improvise. In this case I had to decide carefully in advance how I wanted everything. It has at the same time been tremendously fun. The orchestra arrangements are written by Magnus Lindgren, Erik Arvinder and Calle Rasmusson, three favorite arrangers in the genre. This project has involved a lot of work, so the bigger are my happiness now when it’s done. I hope that everyone who listens will share my happiness” (Rigmor Gustafsson)