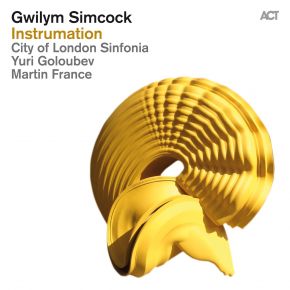 I wrote 'Move!' for myself on piano with the City of London Sinfonia in Spring 2011. When the opportunity came to record it I decided to enhance the rhythmic aspect of the music by creating a trio with Yuri and Martin at the heart of the piece. This allowed me to explore further the improvised sections of the music, and although I've been a little more selfish than usual in taking most of the solo spots, it is the interplay of the rhythm section as a whole which I feel gives the music its drive and energy. The suite runs straight through as one long piece of music, with solo interludes providing a link between the varying styles of the three movements, and providing a contrast to the through-composed nature of them.

'Clunky' is based on a very simple harmonic progression, the bass line of which is mapped out by the cello right from the initial statement. It blossoms out from this basic 4-section form, and develops with space for myself to improvise over an orchestral backing that builds underneath. This textural scheme reappears throughout the suite, and one of the interesting challenges in the mixing process was to weigh up the importance of the piano and the orchestra to create a satisfactory 'foreground' and 'background' to the music. For me the piano is simply an instrument of the ensemble, but sometimes the importance of the solo line needs to take precedence, and I hope we arrived at a successful 'blend' of these two in the end.

'Columns' refers to the initial theme, stated by the piano (coming out of the improvised interlude), which has a stately, almost chorale/organ-like feel to it. Again, the piano leads the movement from a soloist's point of view, but also has the job of fitting into the texture of the orchestra as a whole. As the movement develops, I wanted the harmonic progression to feel not only vertical but also have a strong sense of the horizontal, so the main improvised piano solo is accompanied by a lighter approach to the bass than would maybe be the case in a more conventional jazz context. At the end is a clearly stated progression of seven chords, which brings a conclusion to the harmonic arc that I wanted to create across this movement.

The second piano interlude is quite programmatic - a firing up and winding up of the 'machine' that is the spirit of 'Industrial'. In recent years I’ve tried to develop the rhythmic side of my piano playing, as well as the exploring the possibilities of becoming more expansive and less restrained in my approach to music making in general. I owe a big thanks to my fellow pianists Michael Wollny and Iiro Rantala for their inspiration in this regard - I learned a lot from playing with them recently on an ACT piano summit tour. This movement has an almost constant mechanical drive to it - beautifully led by the energetic but sensitive playing of Martin and Yuri – and this, I hope, provides an exciting climax to the suite.

'Industrial' is dedicated to my Dad, and his love of all things industrial - not to mention his fondness for a tune you can actually tap your feet to!
‘Simple Tales’ requires a little less explanation. I feel, save to say that it was originally a commission for Classical piano trio (violin, cello and piano) that I wanted to augment (as with 'Move!') by adding bass and drums. The suite has been reworked to make it more suitable for this line-up, but essentially it is a collection of more straightforward tunes that are a little more conventional in form and hopefully a suitable contrast to 'Move!' Part of me wanted to expand this line-up further, along the lines of the excellent chamber music albums made by Billy Childs in America, but I concluded that a quintet would be a more effective way to complete this recording.
'Dance!' is dedicated to my Mum and her great enjoyment of Celtic folk music.
'Mr. Bricolage' is inspired by a French builders’ merchants.

I hope you enjoy it!
Gwilym Simcock