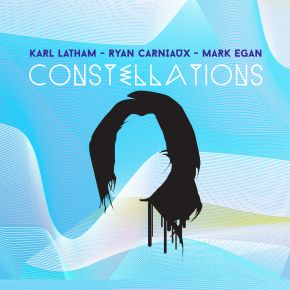 The Icelandic singer Björk has created her own universe with her music and performances that are both exciting and original, but have not found an adequate interpreter until now with “Constellations”. The fact that jazz musicians time and again play cover versions of Björk compositions is a testament to her brilliant expression and vision.

Master drummer Karl Latham has been a Björk fan for many years, Karl’s Resonance, was released by DropzoneJazz Records in 2007, on which a he played a cover version of the Björk song “Pagan Poetry”.  Björk's recording Volta was released the same year, and triggered an urgent desire in Latham not just to cover the songs, but also to create compositions inspired by Bjork, which the group Constellations created for this first release.  Constellations is the embodiment of Björk's complete musical cosmos.

Latham shared his thoughts and plans originally with his long-time friend and colleague bassist Mark Egan. His enthusiasm was contagious and they considered who else could fit into this creative concept. They found another partner during a recording session with the up-and-coming trumpet player Ryan Carniaux. Also it soon became apparent that keyboardist Nick Rolfe, whom Karl and Mark knew from many joint performances, would be a perfect choice for the project.

In the spring of 2013, with sound engineer Jeremy Gillespie, at Barbershop Studios, they created these ground breaking interpretations of Bjork’s compositions and improvisations inspired by her music and the meeting of these musical spirits.

A fascinating portrait of a singer and her music emerged from these sessions. The recordings and group are called Constellations.

The bass lines, with Egan’s signature fluid sound, at times repetitive and then again free flowing, weave through the solid creative grooves created by Latham’s masterful drumming. The clear and powerful trumpet playing by Ryan Carniaux interprets Björk's voice but never mimics it literally. The multi-layered keyboards of Mr. Rolfe support the quartet like a flying sound carpet. The combination of all four musicians creates the hovering thick atmosphere of the "Nordic" sound, which reminds you incessantly of Björk and her performances. Moments from such landmark recordings such as Miles Davis’s “Live Evil” and “Bitches Brew” are reminiscent.

Karl Latham, initiator of the project, is a world-class drummer who has performed and recorded with Don Braden, Joel Frahm, Andy Snitzer, Claudio Roditi, Clark Terry, Joe Lovano, Michal Urbaniak, and rock icon, Johnny Winter. He tours internationally with the group Unit 1 with John Hart and Mark Egan and can be heard on numerous CDs.

Mark Egan is one of the most well known contemporary bassists. He was an early student of Jaco Pastorius and for many years a member of the original Pat Metheny Group. Egan has also performed and recorded in the Gil Evans Monday Night Orchestra, the George Gruntz Concert Jazz Band and a group that he co leads with drummer Danny Gottlieb, Elements. He has also recorded with Sting, Joan Osborn, John McGlaughlin and Marc Cohen, among others.

Ryan Carniaux from Providence, Rhode Island, studied music at Berklee in Boston and then moved to Maastricht (NL). He currently lives in Cologne, tours throughout Europe and the USA and is considered a rising star among young trumpet players. He has played with numerous German musicians (Pablo Held, Norbert Stein and Wolfgang Lackersmid) and internationally with Mark Murphy and Benny Golson.

Nick Rolfe was born in Philadelphia, Pennsylvania, and grew up in Seattle, Washington. He started classical piano lessons when he was six years old. He studied in New York and has been seen and heard time and again with musicians from Slide Hampton to Roy Hargrove as well as Lizz Wright, India Arie and Nona Hendryx. He is also a successful actor and has appeared in various TV and film productions.