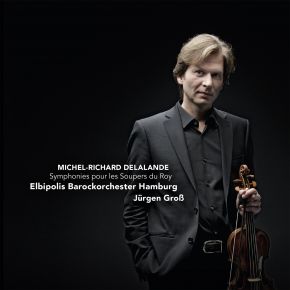 The highly talented musician Michel-Richard Delalande tried hard from an early age to obtain a position at the court of Louis XIV. Delalande gained his first post at court thanks to his success at a competition in 1683 when fifteen composers had been asked to set the words of the psalm “Beati quorum”. This marked the beginning of an era which was to last more than four decades, during which Delalande worked at the French royal court. He continually rose through the ranks, collecting an impressive number of posts. Delalande’s chief task entailed composing church music. In doing so, he raised the “grand motet” – celebratory psalm settings for choir, soloists and orchestra – to a new level, producing over seventy large-scale works. He also composed numerous stage works, particularly ballets and divertissements, as royal entertainments.

Immediately after starting in his post as Surintendant de la Musique de la Chambre in 1689, Delalande began composing instrumental movements. These suites were chiefly intended for the king’s soupers which, as the sociologist Peter Burke has pointed out, resembled a ritual:

“Louis might eat more formally (the grand couvert) or less formally (the petit couvert), but even the least formal occasions, très petit couvert, included three courses and many dishes. These meals were performances before an audience. It was an honour to be allowed to watch the king eat, a greater honour to be spoken to by the king during the meal, a supreme honour to be invited to serve him his food or to eat with him.”*)

In this context, instrumental music played an important role, its magnificence reflecting the regent’s powerful self-image. Since new works were continually being demanded, this “table music” practice resulted, over the course of the years, in an impressive body of works. Delalande had a first volume of these works assembled in 1703, containing 160 compositions which are presented as ten suites. The title of the volume uses the term Les Symphonies de M. de La Lande, referring to the entirety of his orchestral works. Further volumes appeared in the following years until after the composer’s death; in all, there are around three hundred movements in different sequences. They are mostly short compositions, either taking after traditional dance models or presented as character pieces.

These collections of Delalande’s works survive as partitions réduites, i.e. in incomplete versions. Most pieces are only noted with two parts, the upper part (“dessus”) and bass; in the trios, a second upper part (“deuxième dessus”) is added; very rarely does one find four-part pieces (“quatuors”). However, it may be assumed that most of this repertoire would have been played by five-part ensembles, according to the ideal of French orchestral writing at the time.

Jörg Jacob has been involved with the Elbipolis Barockorchester Hamburg from its beginnings, both as performer and programme researcher. For this recording of the Symphonies pour les Soupers du Roy by Michel-Richard Delalande, Jacobi has produced a complete reconstruction of the featured worksOn this new release, the Hamburg ensemble perform these astonishing pieces for the first time in their originally intended five-part textures.

Elbipolis Barockorchester Hamburg (orchestra)More information
07-06-2019 agoraclassica.com
"... tender beauty, sometimes with a hint of melancholy."
08-07-2015 Gramophone
" "
01-06-2015 Klassieke Zaken
""The dozen musicians of Elbiplis regularly arouses the impression to be at least with twice as many, so tastefull and festive it all sounds.""
01-06-2015 Luister
""That is how it should have sounded at the French court.""
19-04-2015 The Observer
"[''].. I was surprised by the richness and depth of this music for Louis XIV.""
13-04-2015 rbb Kulturradio
"CD of the week
"The twelve Elbipolis musicians connect tonal ingenuity with lightness and rhythmical precision. Delalande's music for Ludiwg XIV. is a real discovery.""

04-03-2015 Hamburger Abendblatt
"It is worth to listen to it closely. Especially if the music is interpreted in such a thrilling way as it is on this CD. The ensemble and the conductor combine rhythmical precision with refinement and lightness and revive the special attraction of this music.  "