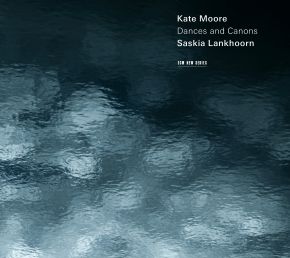 Dances and Canons is the debut ECM recording of both composer Kate Moore and pianist Saskia Lankhoorn. Moore was born in England in 1979 and lives now in the Netherlands (where she studied with Louis Andriessen). However, it is Australia, where she grew up, which has left the strongest impression on her creative imagination, its teeming natural soundscapes transmuted in her music of hypnotically-swarming pulse patterns and shifting, layered planes of sound. In Dutch pianist Lankhoorn (also born 1979), Moore has a dedicated and resourceful interpreter. “It’s impossible to listen to this music,” writes George Miller in the liner note, “and not wonder about the enormous technical demands it makes of the performer.” Moore and Lankhoorn have collaborated regularly since 2003. As well as compositions for solo piano, the programme includes pieces for two pianos, four pianos and multiple pianos, realized in the Auditorio svizzera, Lugano, with Manfred Eicher as producer.

"
01-02-2018 BN/De Stem
"Wonderful things happen outside the usual frames."
23-01-2018 Written in Music
"In Musings from the Lowlands the Dutch landscape is the source of inspiration for creating a new musical world, where styles and genres blend naturally."
13-07-2015 Radio 4 Plaatpaal
"Plaatpaal Radio 4"
19-05-2015 Audiofreaks
""Call it minimal, call it ambient-the music of Kate Moore is of a special caliber, carried out by a special pianist!""
08-05-2015 NRC Handelsblad
"Interview: Saskia Lankhoorn "You do in your life a while all at once and all of a sudden you know what you want"
"I find it increasingly more beautiful.""

04-05-2015 De Volkskrant
""The power of the compositions is in the way the romantic sentiment all of a sudden can turn into a dark and apocalyptic thunder work, in which the basses continue to resonate, until far after the final chord."
"

12-11-2014 Mpodia
"The compositions of Kate Moore, with difficult rhythmical and technical challenges it has and the restrained and yet emotional performance by Lankhoorn

27-09-2014 Het Parool
""The most impressive and most moving piece is called Canon and lasts fifteen minutes. It has a mysterious harmonic sequence with an intoxicating effect that repeats endlessly""