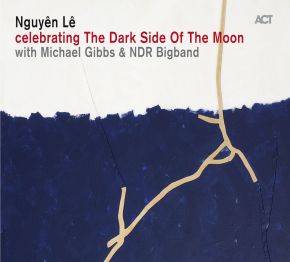 Celebrating The Dark Side Of The Moon

March, 1973... A quartet known for its psychedelic inclinations delivered a fortress of an album: The Dark Side of The Moon was a musical UFO featuring the most advanced technology of the period, a stratospheric record which mirrored society and our errant human ways. Pink Floyd was about to write an essential chapter in rock history and enjoy planetary fame; even today, their album is still one of the greatest sellers of all time.
The idea behind a new reading of it came from ACT- director Siggi Loch and NDR producers Stefan Gerdes and Axel Dürr, whose radio Big Band is no secret for jazz fans. Their idea may have been a bold initiative, but the project implied an orchestra capable of linking tradition with today, and it looked to have every chance of succeeding because it would involve not only Michael Gibbs – composer, arranger, old friend –, but also, joining forces with them, Nguyên Lê, a guitarist known for jumping stylistic borders. The whole idea, finally, seemed a very good one indeed...

Nguyên Lê is a magician; his art reveals itself not only in his own compositions but also in his celebrations of the music of the past, where his approach to the latter resembles sculptures made of new clay. Remember Purple, his tribute to Jimi Hendrix, or more recently his Songs Of Freedom and its evocations of rock's greatest moments. He's a flamboyant guitarist and, while he shows courteous deference to his source material, he has always expressed the full diversity of an imaginary world engendered by his own history, that of a nomad, self-taught virtuoso: his music feeds on influences embracing all continents, and is painted with colours drawn from jazz, rock, and a kind of world fusion permeated with light.
Celebrating The Dark Side Of The Moon demonstrates that the imagination of Nguyên Lê has indeed risen to power; it guides us down other, more personal paths, and is inhabited by that musical "brotherhood" which has never left him all these years. It's as if the ecumenism of song was part of his creative DNA.

And it's true that for the guitarist there was never any question of locking himself away – due to respect in excess – inside the constricting framework of the Floyd's repertoire:
With its gem-like allure, it's obvious that any enterprise which consists solely of a mechanical re- reading of the record would be taking a great risk: the dangers are insipidity and an absence of soul. But Nguyên Lê is one whose aim is true – straight to the heart – and he belongs to those who've learned to let their innermost beings speak out like a passport for the emotions. For a full hour, he gives new shapes to ten compositions in dual complicity with the NDR Big Band, a seasoned formation whose warm textures, uplifted by the orchestrations of Michael Gibbs, elegantly succeed in drawing us away from the original intention of the music without betraying it in the least. Together, they strip the seminal music of its progressive clothes to dress it in another setting, that of an idiom whose dominant sensibilities, those of jazz, come to full bloom in the comfort of the orchestral motifs provided by the NDR Big Band. And it's not even a certainty that the ontological questionings which haunted the texts of Roger Waters and his comrades – money, death, old age, madness – hold much importance in this contemporary celebration.

The essential seems to lie elsewhere: in a more timeless translation of their aesthetic, and in the liberation of energies. The arrangements – three written by Gibbs himself, the others by the guitarist – provide choice settings for inspired soloists and allow other compositions to emerge as natural extensions of the original opus. Nguyên Lê's quick-tempered playing, armed with those fiery, oriental accents we've learned to love, can also safely rely on some trusted guests: Jürgen Attig, Gary Husband, or Youn Sun Nah, a purveyor of magic spells whose chalice brims with magnetic grace.
Celebrating The Dark Side Of The Moon is no simple tribute to a record which made history. It fervently expresses the re-creation – exempt from all imitation – of a score which you can hear in filigree. This is a palimpsest. The writing can still be (re)read, with warm hues forged by respect for the original matrix and the multiple expressions of its identity. Like a principle of Life.

"A very surpising production and the kind of killer album everyone is looking for."