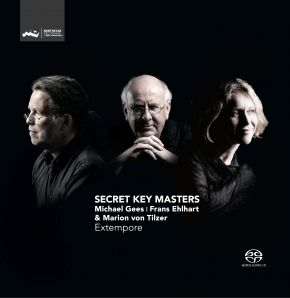 March 26, 2014. An extraordinary day, a day on which three pianists that had never met before gathered at Galaxy Studios, by invitation of producer Bert van der Wolf. It was Van der Wolf who instigated this project. Ever since he first experienced the magical sounds of a piano as a three year old, he had been fascinated by the instrument. Never having been able to fully master the instrument himself, he found in these three pianists the perfect tool to realise his dream of being able to return to his childhood and immerse himself in that special soundworld again. Having met each of them on separate occasions, the playing of Michael Gees, Frans Ehlhart, and Marion von Tilzer struck a chord with Van der Wolf. Their approach to music, whether meticulously composed or improvised on the spot, came so close to his own that he took it upon himself approach these three 'Secret Key Masters' to do a project together.

Michael Gees is mostly known as an accompanist of Lieder: he has worked intensively with artists such as Christoph Prégardien and Julia Kleiter. As a soloist he mostly improvises, often starting with a single chord and developing the melodies from there. In contrast, Marion von Tilzer is very much a composer, who has previously written both chamber music and orchestral works. Frans Ehlhart comes from the world of theatre, and as a composer is influenced by jazz, pop, and classical music. Together with soprano Charlotte Margiono, he recorded an album of his own compositions for Challenge Classics, based on poems by South African poet Ingrid Jonker.

After several years of cancelled appointments and lingering intentions, this year the recording sessions finally took place. Gees, Ehlhart, and Von Tilzer each sat down at the beautiful Steinway grand piano in Van der Wolf's studio, each of them playing their own compositions while the others listened.

There was no time limit for the recording sessions, and nothing parcitular had to be achieved. In two days time, over 8 hours of music was recorded. From all this material, Van der Wolf carefully distilled these 14 tracks, which together make up this 77 minutes long album. The producer is over the moon with the results, stating that 'The Secret Key Masters merge into the most wonderful piano recital I can imagine. Time and space become one and there is just music with no stylistic boundary.'

Marion von Tilzer (composer)More information
01-06-2015 Klassieke Zaken
"Interview: "We were in a welcoming living room", says Gees. "That made the difference, then you are at ease and it soon becomes very personal."

08-01-2015 WAZ
"An unconventional as well as brilliant project. The result of the recording summarized into 77 exciting minutes of music. A real personal tip."